Google-Facebook undersea cable to China cut short by US 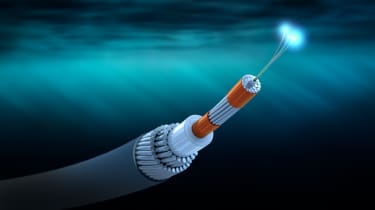 Plans for an underwater data cable between LA and Hong Kong have been scrapped after the US government suggested that China could use it to steal data.

The project is run by the Pacific Light Data Company and includes tech firms like Google and Facebook.

The issue is that the Hong Kong section would have been managed by China's Dr Peng Group, a firm the US government believes has a relationship with the Chinese intelligence and security services.

The project was first announced in 2016. At that time, Google said the cable would "provide enough capacity for Hong Kong to have 80 million concurrent HD video conference calls with Los Angeles". To use the cable, however, companies need permission from the US Federal Communications Commission (FCC).

Around 12,800 km (800 miles) of the cable has already been laid but, according to new plans submitted to the US communication authority, it now only links the US to the Philippines and Taiwan.

"We can confirm that the original application for the PLCN cable system has been withdrawn, and a revised application for the US-Taiwan and US-Philippines portions of the system has been submitted," a spokeswoman for Google told the BBC. "We continue to work through established channels to obtain cable landing licenses for our undersea cables." FCC Commissioner Geoffery Stark said in a tweet that he "shared the concerns" of the US Department of Justice, adding that he would "continue to speak out" against China accessing data carried by the cables.  Operation of the cable has been caught in the ongoing US-China trade war, which doesn't seem to have an end in sight.  A similar fibre-optic cable has been announced between the UK, US and Spain. The 'Grace Hopper' cable will run from New York and split off to Bilbao in Spain and Cornwall in the UK.