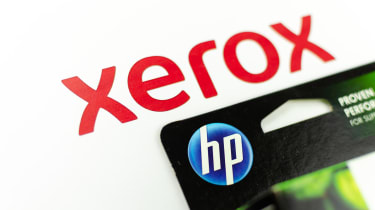 Xerox has pushed on with its proposed buyout of rival HP, after the printer and copier giant successfully secured $24 billion in binding financing commitments.

The development means that funds required for a potential takeover of its larger market rival will be provided by three major financial institutions – Citi, Mizuho and Bank of America.

The two firms have been at loggerheads since Xerox's attempted buyout bid was unanimously rejected by the HP board back in November. At the time, HP said the proposals "significantly undervalued" the business and was not in its best interests.

The company, which is reportedly valued at around $27 billion compared to Xerox's $10 billion, also subsequently questioned whether Xerox had the financial strength to purchase a business approximately three times its own size.

Despite the rejection, Xerox pushed on and began putting its case forward direct to HP's shareholders, arguing that the increased cash flow would help pare debt, raise capital returns, and drive investment in innovation.

Now, in a public letter to those shareholders, Xerox Holdings Corporation CEO John Visentin said the $24 billion in financing commitments is designed to dispel HP concerns that it would be unable to put up the numbers required to complete the deal.

"We have always maintained that our proposal is not subject to a financing contingency, but in order to remove any doubt, we have obtained binding financing commitments (that are not subject to any due diligence condition) from Citi, Misuho and Bank of America," Visentin explained.

"My offer stands to meet with you in person, with or without your advisors, to begin negotiating this transaction."

Xerox maintains that combining the two printer and copier businesses would prove to be "value-creating combination" that would see revenue growth of up to $1.5 billion over the next three years, as well as cut operating costs by up to $2 billion.

"It remains clear to all of us that bringing our companies together would deliver substantial synergies and meaningfully enhanced cash flow that could, in turn, enable increased investments in innovation and greater returns to shareholders," Visentin told shareholders.