Google Cloud secures deal with the US Department of Defense 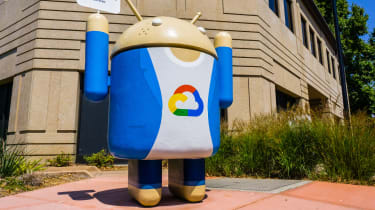 ​Google Cloud has announced that it has secured a contract with the United States Department of Defense in order to aid in the detection and countering of cyber threats.

The Google Cloud Console is to manage the applications run by the Defense Innovation Unit across platforms such as Google Cloud, Amazon Web Services (AWS), and Microsoft Azure.

Although no specific sum has been disclosed, the contract is valued at “seven figures”, according to Axios.

"Multi-cloud is the future," Google Cloud VP of public sector Mike Daniels told the publication. "This is now coming to the federal government as well."

The “seven figure” deal is significantly less than the $10bn JEDI contract which involves almost 80% of the Department of Defence's IT systems being migrated to the cloud that could last 10 years. The deal had garnered headlines for the past two years, with multiple cloud vendors, including AWS, Oracle, IBM, and Microsoft, battling to be chosen by the US government.

In December 2018, Google Cloud announced that it would "not be bidding on the JEDI contract because first, we couldn't be assured that it would align with our AI Principles, and second, we determined that there were portions of the contract that were out of scope with our current government certifications”.

However, the announcement of the new deal with the US Department of Defense might signify that Google has since earned those certifications.

The news comes a month after an internal investigation by the Department of Defence (DoD) found that the October 2019 decision to award the JEDI contract to Microsoft was administered fairly, despite widespread reports of political interference.

The JEDI project was halted in February in order to determine whether Department of Defence improperly evaluated a Microsoft storage price scenario. Prior to that, AWS filed an appeal claiming that "political influence" led the Pentagon to award the $10bn contract to Microsoft. Although it was believed at the time that AWS was "likely to succeed" in the court challenge, that was not the case.