Cambridge attracts four times as much tech investment as London 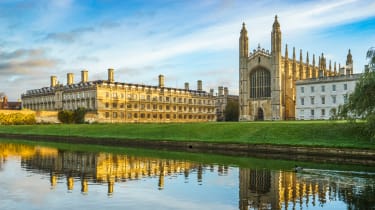 Cambridge is being heralded as the UK's own Silicon Valley after 2019 saw the city receive four times the amount of tech investment per head than in London.

Although overall investment remains far higher in the capital, Cambridge secured more than £3,300 of investment per head to support its burgeoning technology hubs, most of which is being ploughed into so-called 'deep tech', including engineering innovation and scientific research.

That's compared to London, which saw just over £800 invested per head, according to an analysis by recruitment specialist Pareto Law.

The investment comes at a time when technology companies are seeking to move away from the expensive rental zones in London and take advantage of the UK's many thriving digital hubs, including Bristol, Leeds and, most recently, Cambridge.

This is being supported in turn by a rapidly growing startup scene, with the university city enjoying around three startups per one thousand people, compared to London at two startups per thousand. This has translated to a 60% year-on-year increase of startup launches in the area.

Driving most of this investment is the city's biotechnology industry, with 46 specialist firms operating in Cambridge alone. Cambridge Science Park is also home to large multinationals, such as science and chemicals company Johnson Matthey, and AstraZeneca, following a move of its global HQ to Cambridge in 2016.

The city's artificial intelligence and delivery systems industries were also recipients of major investment in 2019, at €2.2 billion and €1.1 billion respectively.

The report found that technology is actually thriving across the country as a whole. Outside of the capital, Glasgow, Oxford also ranked as the biggest winners of tech investment. Manchester, fast becoming one of the north's technology hotspots, was also celebrated for its delivery tech industry, with heavy presence from the likes of AO.com. Similarly, Brighton was singled out for its augmented reality sector, now a host of a Sumo Digital studio and often a playground for Digital Catapult events.

Edinburgh, having long been a centre for financial activity in the north, has now also become a beacon for blockchain investment and research, the report found.

"It's great to see the nation's tech scene developing so well," said Jonathan Fitchew, CEO of Pareto Law. "The UK now boasts pockets of the country that are becoming renowned for their tech specialities, including our home in the North West which, thanks to the exciting start-ups in Manchester are world leaders in the delivery sector."

"It's especially positive to see cities outside of the capital rising to compete with, and sometimes surpass, London. Cambridge emerging as the UK's Silicon Valley is a prime example of how successful technology hubs can develop and attract the best candidates outside of London."