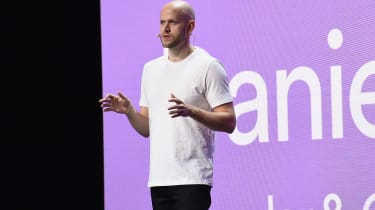 European entrepreneurs are selling their startups too early and handing over their companies to US buyers before reaching their full potential, according to the founder of Spotify.

They have become "hesitant" to the risks involved with running a business and are no longer "embracing the unknown", Daniel Ek said at an event on Thursday.

Speaking at a Slush virtual event, the Spotify CEO announced he would be investing €1 billion (£913m) of his personal finances into new tech businesses in Europe. Ek believes all the ingredients for a European super company are already there, but the collective thinking within its tech ecosystem was "too short-term" and there is too much hesitantancy to "stick it out".

The €1bn investment, to be spread over the next ten years, represents almost a third of Ek's €3.2bn net worth.

"Time and again we see our brilliant entrepreneurs handing over their companies to the largest bidder before their ideas have even been fully realised – indeed before they have time to evolve into something even more promising," he said. "Too often we see all the well-educated talent I've spoken about in a mass exodus to the US."

Ek pointed to AI startup DeepMind as an example of Euro talent being snapped too early by an American business. The British firm was sold to Google for $500 million (£392m) in 2014.

Similarly, Cambridgeshire chipmaker Arm was sold to Japanese investment group Softbank in 2016. The firm is now the subject of a takeover by US giant Nvidia, with many MPs suggesting the country has given away its most profitable tech firm.

Ek argued that "one of the greatest challenges" facing small businesses is the lack of clear routes for funding, often leading many to sell to international buyers before they have had a chance to realise their potential.

"I will devote one billion euros of my personal resources to enabling the ecosystem of builders to achieve this European Dream over the next decade," Ek added. "I believe all the ingredients are there, we just have to put it together and then nourish it."