IT Pro Panel: The post-COVID future of tech conferences

How will events come back from lockdown - and how will they have changed? 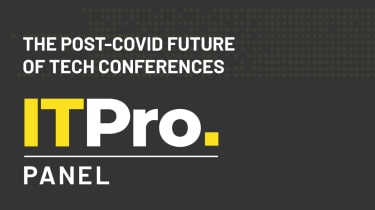 In any normal year, around this time would be when the season of tech events, expos and conferences would be starting to get underway. But this is not a normal year, and the convention halls remain empty, with the flocks of delegates, speakers and vendors that would usually crowd the floors kept at bay by the ongoing COVID-19 crisis.

In most places, lockdowns are now gradually starting to lift, but while offices may be reopening again, large-scale events are a much less likely proposition. So what is the future of tech events in a post-COVID setting? What form should they return in, and are there any lessons that organisers can take from the current situation when they do come back? We spoke to the IT Pro Panel to find out.

Bang for your buck

Attending conferences and events often accounts for a significant portion of any executive’s role, but the average number of events attended by our panellists was more varied than one might expect. Being in the events business himself, it’s perhaps unsurprising that Richmond Events director of IT Liam Quinn was among the most regular conference-goers, attending an average of five or six events per year, split between sector specific event-tech conferences, supplier user-groups and conferences relating to new technologies that he was researching for potential deployment.

For others, like SmartDebit CIO Gavin Scruby or Peter Donlon, CTO of Moonpig, attending an event is a much rarer luxury. Both executives said they only manage to attend one or two events every year, but Donlon pointed out that for him, it’s much more important that his team members get out to events.

The Moonpig team focuses on attending events which relate to the technology that they’re currently using - which most of the time means AWS, which Donlon says are great for building the team’s knowledge. He says the value of sending his staff to events is the new perspective and ideas that they come back with.

“We always try to make sure whoever attends shares what they've learnt with the wider team,” he says. “I also do think a lot of the team just enjoy the atmosphere of events and as such it's a good motivator too.”

Scruby also employs this tactic, making staff present their learning from events back to their teams within the organisation to ensure that the knowledge is shared as widely as possible. However, he speculates that, if post-COVID events (and related resources) become more widely accessible, this value may be somewhat diminished.

“The key events to attend are those that show the latest developments and trends in things like security and infrastructure automation. We're always trying to become more secure and get more bang for our buck.”

Knowledge-gathering was cited as the key priority by all of our panellists when attending events, whether it’s in the form of competitor analysis or familiarising the team with a new technology. Quinn noted that networking is always part of what he does, so naturally extends to events as well, while McDermott and other panellists also highlighted that they are often speaking at events as well. Sales and brand-building were also mentioned as occasional goals, particularly by those of our panellists who wear multiple hats.

“For me, it depends on which part of the organisation I'm representing more than the type of event,” Scruby explains. “For IT, it will always be knowledge gathering. If I'm proxying for the sales team, it'll be networking and selling, and if I'm speaking or representing marketing, it will be brand building. I try to make sure they're always fun and useful as well, or there's no point investing the time. This is something that's in some ways hardest for IT events, as we can log leads and conversions for sales and marketing events.”

But how do these goals and ambitions compare to the realities of 2020? The vast majority of the year’s regular conferences have been forced to pivot to a virtual model, with varying degrees of success. It’s been a tough shift to adapt to for both organisers and attendees, and as someone who sits on both sides of the fence, Quinn can attest to this.

“We've run quite a few virtual forums and will be moving to a hybrid format when we start running face-to-face forums in October,” he says. “For my personal attendance at webinars, I'm Zoomed out! I tend to register and then watch parts of the recordings after.”

“I agree with Liam that when focus wanes or important email comes in, you multitask or zone out of events,” McDermott says, “but doesn’t that happen when you’re sitting in the audience at a physical event and start checking your emails?”

He recalls one virtual event he attended which incentivised attendees to engage with the content through gamification, introducing a points system for certain actions and creating a leaderboard with prizes for the most active participants.

“I’m not sure if it led to the right behaviour. Did I attend the last two presentations just to stay in the top 10?”

“Similarly to Liam and Graeme, I can find myself zoning out when doing these events remotely,” Donlon adds, “especially with the amount going on and how much time I'm spending on video calls anyway. I like consuming the content in my own time, but the live remote events don't work so well. An hour is probably sensible. Beyond that, I find it really hard going. At an in-person event, you'd be moving around and there are breaks and such which make it a bit easier going.”

McDermott also notes that while the virtual events he’s attended over the course of lockdown have been steadily improving in quality, virtual events don’t have the same potential for organic networking opportunities afforded by things like bumping into people in-between sessions; “That’s hard to replicate in a virtual world.”

Accessibility was another thorny topic. While virtual events are undoubtedly easier to attend and contribute to than physical ones, Scruby has found that the general climate of uncertainty coupled with increased demand on IT to support remote workers has actually left him with less time to attend events than normal.

He does note, however, that there are definite up-sides to virtual events, particularly in terms of location. While SmartDebit is only based in Guildford, an hour and a half away from London, this means that attending an event in the city is an all-day commitment and requires a much more strategic approach. Meanwhile, Addison Lee’s London base allowed McDermott to briefly drop into events before returning to the office; moving to a new role outside London will diminish this, so he hopes the new norm of virtual events will help to compensate.

“I think the London centric approach has a big impact,” Quinn agrees. “I will regularly go to events at excel or Olympia knowing I can go early, work in Costa, spend an hour at the event and then head back to the office or home, having really only lost an hour or two from the day. It does make me very open to seeing what's going on for events I don't have to pay for.”

“Many of my evening networking events have converted to virtual, and many want the theme to remain virtual or hybrid,” continues McDermott. It has increased attendance geographically and the style of breakout rooms has meant I’ve met more people in three months than, say, two years of physical events.”

Back to square one

It’s hard to make accurate predictions about anything while coronavirus continues to ravage the world, but the prevailing consensus among our panellists was that when the dust eventually settles, the prevailing format for conferences and events will be a blended model, combining the face-to-face networking opportunities of the physical with the increased convenience of virtual.

“I definitely think there will be a change and we'll move to more of a hybrid model in a post-COVID world,” Gandhi says. “It will of course not be as virtual as things are now, but I think one important lesson we have all learned is the benefit in certain instances of a virtual or hybrid approach and these learnings will be applied in a post-COVID world.”

“I think it's an opportunity for the event industry to reset. They can introspect and rather than just be running at 100 miles per hour, they can work on how they curate events and the event experience. It's challenging because financially, they will be struggling and will not have the money to invest internally, but there's still a lot they can do with the time they have, even without a substantial pot of money.”

The principle change that our panellists said they would like to see is a greater focus on post-event resources such as recordings of sessions, presentation decks and transcripts. If these were available to delegates, Gandhi and Scruby agreed, this would make the whole venture much more compelling, as it allows attendees to absorb the learnings from events at their own pace, without having to go to every session. In fact, Scruby says, he’d be more inclined to pay for these materials than pay an actual ticket to the event.

This is something that event organisers would do well to heed, particularly as all of our panellists expressed strong apprehension at the prospect of attending any physical events in the near future. Donlon thinks the industry is “quite a long way off of physical events” and notes that, as long as social distancing remains in effect, the value of in-person events is questionable; “if the event was at capacity, it probably wouldn't feel safe. If it's way under capacity, then I'm not sure it would have the right atmosphere.”

McDermott agrees, saying: “I said yes to a postponed event in December in around June. I’m now thinking maybe not.”

So what does the future look like for tech events in post-COVID world? In Scruby’s view, it’s still a little too early for most companies to be thinking about events; those that are doing well should be consolidating their victories, he says, while those that have struggled during the crisis will likely see events as needless expense. While he does think that the desire to get ‘back to normal’ will lead to a bump for in-person events, eventually he believes that virtual events will become much more prevalent than they were previously.

“It was time for a long overdue change to the format of traditional conference events,” McDermott says. “The new norm may take some time to reach everyone’s desired state but it will get there and we will enjoy the benefits. Eventually, we will want to return to a hybrid model with old-style face-to-face tech events - but that could be five years away, so enjoy the virtual conference. It’s here to stay.”