How do you really acknowledge an employee’s value? 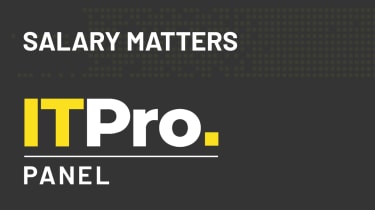 Some say it’s the root of all evil, some say it makes the world go round, but however you look at it, money is a central part of all our lives. Whether we like it or not, our salary has a huge impact on our day-to-day reality, which is what makes our general reluctance to talk about it so strange.

To many people, the idea of having frank and open conversations about how much you earn is still considered somewhat gauche, but it’s not just about the raw numbers. Many workers still struggle to discuss matters of compensation with their line managers, which can lead to resentment, dissatisfaction and staff attrition.

Organisations that aren’t delivering appropriate rewards and incentives run the risk of losing their most talented employees to rival businesses, so in this month’s IT Pro Panel discussion, we asked some of our expert panellists about the impact of salary on IT, the relationship between skills and paychecks, and how companies can approach these conversations in a sensitive manner.

One of the most common ways salaries can cause problems for a company is when it introduces conflict between two employees of similar seniority who have ended up on different pay scales. There are a number of ways that this situation can come about, but it’s one which Kantar CISO Paul Watts calls “a potential timebomb”.

“If they ever compare notes and realise the gaps – or worse, if a breach causes those discrepancies to become public – then you’ve got a big problem on your hands.”

The potential impact of the latter scenario has already been demonstrated, in the form of 2014’s notorious Sony Pictures hack. One of the biggest revelations from the emails leaked by hackers was that Jennifer Lawrence was paid less than her male co-stars for her role in American Hustle – a scandal that generated significant negative publicity for the company and led to many actors raising questions around their own contracts.

One potential way to address this problem in situations not involving Hollywood movie stars is to use a system of pre-set grade boundaries, hopefully ensuring that any disparities are limited. This is a method SmartDebit CIO Gavin Scruby has seen work at larger organisations, although he also notes that it’s easier in some ways to manage the issue within smaller companies, due to the fact that there’s more transparency surrounding compensation.

In order to define these bands in the first place, however, Newcastle Building Society CIO Manila McLean says that businesses need to be contextualising the conversation through robust benchmark data on average salaries for various roles, geographies and specialisations – including through informal channels, as well as official ones. McLean and Watts also both highlight the value of having open channels of communication between HR departments and the business or product owners that they are recruiting on behalf of.

“More and more I'm seeing that collaboration starting to happen,” Watts says. “It’s important when it comes to specialist roles for them to seek and absorb insight from subject leaders in the business to help shape pay scales against the markets that – let's be honest – are better understood by those subject matter experts. Collaboration is key.”

This level of collaboration is especially important when it comes to tech, where the rapidly-changing and highly specialised nature of specific roles can make shaping a balanced compensation package trickier than in other areas of the business. More established technical roles like software developers or QA testers are well-understood by HR operatives in terms of remuneration packages, McLean says, but for newer roles, a lack of historical data will mean that they have to rely on subject matter experts within the business.

“To us, roles like product owner or security architect will be pretty familiar, but can be more confusing for a colleague in Reward to understand and set the right package for.”

Newer technology categories can present other, less expected problems when considering salaries as well. In fact, trendy technologies like Kubernetes, artificial intelligence and data analytics can suffer from over-inflated salaries due to their high demand.

“If these technologies are new and high on the marketing hype curve, companies fear losing them so they get more than they probably should,” Scruby says. “I've seen a number of database architects try to pass themselves off as ‘data scientists’; and devs with a smattering of stats skills claim they are ‘AI specialists’. But that false grading is a different problem – that’s a question of how to make sure skills are up to the salaries.”

One approach has traditionally been to fall back on the proliferation of certifications, accreditations and qualifications that IT professionals can earn. These cover everything from general security training all the way up to specific product stacks in areas like storage or networking, and are often seen as an excellent way to make oneself more employable. Watts cautions against an over-reliance on accreditations as a method of judging skill, however; while they’re a valuable way to independently authenticate someone’s competency, he notes that “learning a skill isn't the same as being able to apply it well”.

It’s at this point that we should also acknowledge a growing trend in the newer generations that are coming into the workforce. For many younger employees, salary is no longer their sole motivating factor in terms of compensation; flexibility of working location and hours are now playing a major role in their career decisions, as are training and development, ethics, and the technical tools that they’re expected to work with.

“Salaries are often less for third-sector roles: The work motivation is different,” Scruby explains. “That’s the case for many non-private sector roles, and it depends on the individual and their circumstances. For example, I used to work as a scientist, and academia pays less for the same kinds of roles. I enjoyed pushing the limits of knowledge. Once I had a mortgage and a family, my priorities changed, but it was great at the time.”

“Dare I say, the younger the applicant, the more broad the package is expected to be – and it isn't all about cash any more,” Watts adds. “I've seen applicants walk away from organisations with a poor green agenda before, and I've certainly seen employees walk from organisations that aren’t doing ‘interesting stuff’.”

“I would encourage individuals to consider the whole package including the development opportunities, the culture, quality of teammates, the legacy you can leave and the difference you can make,” McLean says. “Salary is important and you should know ‘the going rate’ but once that box is ticked it’s the whole package that’s important. A bit like Maslow's Hierarchy of Needs.”

This calculus of salary versus alternative compensation factors into employee retention just as much as it does into the hiring process. If someone wants to leave the company, it’s often not a larger salary that will tempt them into staying – assuming that they’re on a competitive wage to begin with.

“As Paul noted,” Scruby says, “there are many other things that motivate people, and even sitting down and mapping out a career and training plan, along with discussions on the positives of the current organisation, can really help.”

It’s worth making time to do this in order to keep existing employees happy and contented, McLean notes, as hiring new employees is often expensive. New staff are also at a disadvantage compared to established workers as they don’t know the business as well, and often require additional training on various internal tools. However, placating disgruntled employees with compensation adjustments can be a risky proposition.

“If you let incumbents fall behind and they become a flight risk, trying to entice them to stay with an increase can sometimes backfire,” she says. “If you counter offer, the colleague may wonder why they weren’t valued enough to be paid their worth before.”

This is a difficult balance to strike; jumps between companies can often result in significant salary increases that long-serving staff may not have benefited from. This is another way in which pay disparity can be introduced between similar roles.

“Performance-related pay is really important, but in my experience there tends to be a certain pot for annual rises,” McLean continues. “So a high performer will receive, say, 4% and a standard performer, say, 2% but for colleagues who have been with an organisation several years over time it may not rise in line with their specific job market. I’ve had examples when ‘out of cycle’ rises were appropriate to ensure the colleague was being appropriately rewarded, rather than sticking to a predefined process.”

The flip-side of these conversations is sometimes managers have to gently deny a salary increase that an employee hasn’t justified. “I'd like people to understand that they can't just wave a job advert they have found and get a raise,” Scruby says, pointing out that job adverts are intended to showcase the best possible package, and may not be an accurate representation of any potential job offers.

“Secondly, many people believe a recruiter calling them to put them forwards for something is 'headhunting' and that this is close to an offer or shows some inherent value, rather than it being an agent trying to fill slots,” he goes on.

“Just understanding these two factors shows me the person has a grasp of reality and can cut through hype, which is a valuable skill in itself.”

To apply to join the IT Pro Panel, please click here to enter your details. Please note that we are not accepting applications from technology vendors at this time.