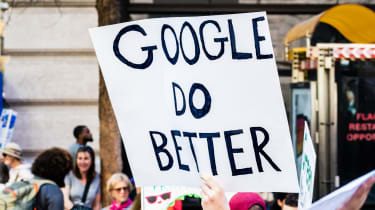 Google has been accused of trying to crush internal dissent over some of its practices after firing several activist employees on Monday.

Google claims that the four employees were fired for “violations of our data security policies”, but protestors within the company claim that the firings are intended as a warning that rocking the boat will not be tolerated.

Google’s stated rationale for taking action against the employees was that “the individuals were involved in systematic searches for other employees’ materials and work”, including “searching for, accessing, and distributing business information outside the scope of their jobs”, according to an internal email sent to staff after the employees’ termination and published by Bloomberg.

“This information, along with details of internal emails and inaccurate descriptions about Googlers’ work, was subsequently shared externally," the email read.

The four newly-unemployed Googlers include Laurence Berland and Rebecca Rivers, both of whom have claimed that they were targeted by the company for protesting against its policies. Workers at the company have increasingly challenged its decisions, such as increased data gathering and building a censored search engine for the Chinese market.

Berland had been involved with protests against YouTube’s handling of hate speech, while both employees have helped organise internal protests against Google Cloud’s contract with US Customs and Border Patrol.

Both employees were placed on administrative leave prior to their dismissal, sparking protests outside Google’s San Francisco office on Friday demanding that they be reinstated. The demonstrating workers called the decision to place Rivers and Berland on leave “a brute force intimidation attempt to silence workers”, according to Bloomberg.

During a speech at Friday’s protest, Rivers stated that when ‘interrogated’ by management, many questions focused on her involvement with a petition urging the company to rescind its involvement with CBP, which has been co-signed by more than 1,500 employees.

“Even though Rebecca and I are experiencing the full force of Google’s retaliation, this is not really about me. It’s not about Rebecca. It’s about us, all of us, and the open culture we built and treasure together,” Berland said. “If they can do this to me, they can do this to anyone, and that culture is lost forever.”

Their subsequent termination has met with similar criticism, and the ‘Google Walkout For Real Change’ group representing the protesting workers has excoriated it as “an attempt to crush worker organising”. In defence of their actions, the group has cited the company’s long-standing practise of urging ‘Nooglers’ to read up on internal documents from projects across the company - a policy which was recently changed to prohibit looking at certain documents but allegedly without giving any guidance on which ones are off-limits - as well as the company’s own code of conduct, which contains the maxim “don’t be evil, and if you see something that you think isn’t right - speak up”.

“With these firings, Google is ramping up its illegal retaliation against workers engaging in protected organising,” the Walkout group stated in a Medium post. “This is classic union busting dressed up in tech industry jargon, and we won’t stand for it.”

Another bone of contention is Google’s hiring of IRI Consultants, a firm that specialises in helping large organisations defang worker’s attempts at organising themselves. The firm’s campaign focus on “the limits of what a union can do, regardless of union promises” and “often include countering petitions or decertifying existing unions”.

Google has denied charges that it’s attempting to quell worker activism, but the protests have already drawn the attention of Democratic party senator, presidential candidate and fierce workers’ rights activist Bernie Sanders, who urges the company to treat workers with “respect and dignity”.

“Instead of upholding user trust, Google is choosing to hide unethical behavior instead of correct it, to double down on hostile workplace conduct instead of fixing it,” Walkout stated.

“They think this will crush our efforts, but it won’t. For every one they retaliate against, there are hundreds of us who will fight, and together we will win. One of the most powerful companies in the world wouldn’t be retaliating against us if collective action didn’t work.”