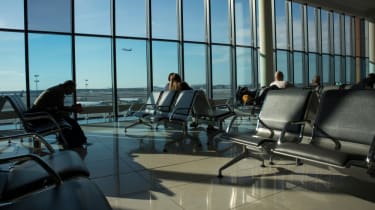 I don’t think virtual conferences will ever replace the real thing, particularly those that have shifted from being immense shows to video streams you can watch in your pyjamas (or Hawaiian shirt, shorts and flip flops, given the weather).

There’s a distinct lack of IT professionals wandering around bleary-eyed and just a touch hungover, nobody is drinking coffee of questionable quality, nor have I spent any time waiting in a cafe to get a decent coffee and a pastry.

I miss the pastries. But I also miss the networking and insight gained from casual conversations around the fringes of the conference. And I’m certain I’m not alone.

But it’s not all doom and gloom. HPE Discover Virtual Experience is the second annual-conference-turned-virtual event I’ve attended this year, (the first being Appian World) and there are definitely some benefits. I can clearly hear what presenters are saying without the sound of tapping on a hundred keyboards or the constant white noise of giant air conditioning systems. Nobody has turned up 30+ minutes late to their own keynote and I haven’t had to run between sessions. And, despite the title of this column, I’m also not jet-lagged, which is a bonus.

Getting more of an insight into products and strategies has also been much easier via Q&A sessions, which (and I hope you agree) has brought a more nuanced level of reporting than I’m often able to get.

So what did we find out during the show? Well, green isn’t just another colour of the rainbow as far as HPE is concerned, that’s for sure. As well as having a green logo, the company has added features to its ‘as a service’ platform, HPE GreenLake, and unveiled its software portfolio, Ezmeral, a name inspired by the Spanish word esmeralda, meaning emerald – a jewel that, as I’m sure you have noticed, is green.

Ezmeral certainly is a nice, vaguely exotic-sounding name. But I couldn’t help thinking the product itself sounded rather like the resurrection of the more mundanely named Software Business Segment. Normally, this is the kind of thing I would have heard the first of during the keynote, then headed out to accost some poor unsuspecting analyst or industry watcher by the coffee urns and biscuits to see what their take was. But instead, I had the opportunity to ask Neri himself during an early press conference.

It’ll come as no surprise that he said “no”, but it’s worth reading his full answer to make up your own mind.

Naming services after things that are green aside, there was another strong theme: getting businesses back to work and surviving the oncoming economic crisis, which is predicted to be much worse than the 2008/9 global financial crisis, which we have still been feeling the repercussions from anyway all these years down the line.

On the back-to-work element, the company has introduced a range of new offerings available through its Pointnext services business. These are primarily aimed at detecting and managing any outbreaks within a business, as well as reducing the opportunity for an outbreak to happen in the first place.

When it comes to surviving the predicted recession generated by COVID-19, Neri said the key was not to hoard money, but to focus on investment.

“We went back and looked at the 2008/2009 crisis and what were the decisions made at the time, not just in the former HP but across the industry,” he told journalists. “The one thing that was very clear to me is that we actually need to take advantage of these unfortunate events, called the pandemic, and double down on R&D investments, because fundamentally those are who will become stronger on the other end of this recovery, with the right portfolio and the right innovation, will be the winners.

"And in my view, we’re going to spend more on both organic and, assuming the right options are out there inorganically, to accelerate that vision.”

I’ll be interested to find out over the course of the next year where exactly this vision goes in concrete terms and who know, at the end of it I may even get that pastry.