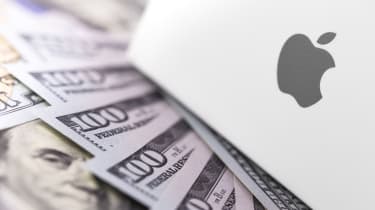 Apple has become the first US-based company to reach a valuation of $2 trillion only two years after hitting a $1 trillion market cap, despite the coronavirus-fuelled economic turmoil that’s devastated so many businesses.

While Apple may dip below the $2 trillion mark in future, depending on its market performance, it’s is a major milestone and testament to the resilience of the company and its dominance against some of its major rivals.

The scale of its surge in valuation has also been extraordinary, with the company only taking two years to achieve a second trillion dollars in valuation versus the 42 years it took the firm to reach the $1 trillion market cap.

The company’s shares soared in value during 2020, gaining by roughly 60% in value despite the economic disruption caused by COVID-19, both to other businesses and even national economies. Over the last year, meanwhile, Apple shares have climbed more than 120%, according to CNBC.

The US economy, for example, contracted by 32.9% during the second quarter of 2020, while the UK GDP fell by 20.4%. Apple’s revenue, during the same period, was $59.7 billion, far exceeding expectations and forecasts, climbing 1% year-on-year. This growth was fuelled mainly by the sale of hardware, and profits from services.

While Apple’s hardware, especially its iPhones and Macs, has been a major source of revenue through the years, a massive expansion in its software and services businesses have been critical to its growth. Piper Jaffray analyst Michael Olsen claimed Apple’s service business was worth approximately $502 billion in 2019, against an estimated $398.8 billion valuation attached to its hardware business, according to Investopedia.

To outline the scale of growth in the last decade, revenue from services during the 2019 fiscal year was $46.3 billion, including iCloud storage, Apple Music, and AppleCare warranties, as well as Apple TV+ and Apple Arcade most recently. By way of comparison, in 2010, Apple’s services businesses only generated $5.2 billion in revenue, although this doubled over the next two years to $10.2 billion, and has surged since then.

An area that Apple hasn’t explored in much depth against some of its trillion-plus-dollar US-based rivals Amazon, Google and Microsoft, is enterprise services, suggesting there's room yet for Apple to grow further in the coming months and years.

Ahead of the iPhone 11 launch in 2019, the company’s vice president of apps and services, Susan Prescott, discussed how the company does plan on beefing up its enterprise strategy, according to Forbes.

The strategy, Prescott said, would build on the momentum that Apple sparked with the launch of the iPhone in terms of ‘bring your own device’ (BYOD) and the consumerisation of IT. Elements such as user enrollment, which allows two Apple IDs on a single device, represent the start of this strategy, making it easier to use devices like iPads and iPhones in a business environment where devices may be exchanged between staff regularly.

The growth in Apple’s enterprise business can also be seen in some of its recent moves, including the acquisition of the enterprise security company Fleetsmith in June 2020. The company, founded in 2014, specialises in management and security services that allows administrators to oversee their fleet of enterprise devices.