Boris Johnson commits to UK tech tax despite US pressure 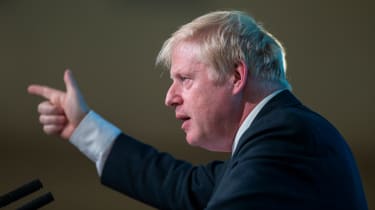 Plans to enforce a levy on the revenues of digital companies will go ahead if Boris Johnson wins the forthcoming election, despite Donald Trump's threats of retaliation over France's similar tax plans.

The digital services tax (DST), which imposes a 2% revenue tax on the biggest tech companies like Google and Facebook, is set to come into force from April 2020. It's similar in nature to the 3% levy introduced by the French government.

The prime minister has suggested this will go ahead as planned if he stays in power, despite the fact the US has indicated it would lash out with trading tariffs against countries that have implemented similar measures, like France.

The US announced on Monday that it may slap additional duties of up to 100% on $2.4 billion worth of goods exported from France if the tax went ahead, including cheese, handbags and Champagne.

Any tariffs against an EU member state, however, would also need to be applied to the entire trading bloc due to membership of the customs union.

"On the digital services tax, I do think we need to look at the operation of the big digital companies and the huge revenues they have in this country and the amount of tax that they pay," Johnson told BBC News.

"We need to sort that out. They need to make a fairer contribution."

The pledge to commit to the DST has also been issued through the prism of the general election campaign, and is contained in the Conservative Party manifesto.

The Labour Party has also pledged to impose a version of the DST to pay for the running costs of its public full-fibre network, once it nationalises Openreach in order to lay down the broadband infrastructure.

The Liberal Democrats have pledged to "improve the DST, which suggests the levy could be higher, or even divided into several bands.

The levy, introduced by the chancellor under Theresa May, Phillip Hammond, applies to digital platforms delivering search engines, social media, and online marketplaces that generate more than £500 million per year in revenue. The measures are expected to raise £400 million in tax revenue by 2022/23.

Hammond said at the time the tax aimed to crack down on the "unsustainable and unfair" tax practices that have seen HMRC gather modest sums from tech companies despite gargantuan UK sales.

UK tech companies have since expressed concerns with the measures, with Tech London Advocates' founder Russ Shaw suggesting such a move could stifle entrepreneurialism and innovation.

Trade association techUK, meanwhile, claimed the levy would slow investment and raise consumer costs. The organisation is also concerned the tax would put its members at risk of retaliatory action by the Trump administration.

Trump suggested in July the US would investigate France's proposed tax on the basis it may unfairly target US companies. The plans involve a 3% tax on digital companies with revenues of more than €750m (£670 million), of which at least €25m (£22.4 million) is generated in France.

The EU had previously suggested proposals for a continental tech tax, pushed mainly by the UK, France and Italy, in order to recoup some of the taxation lost through the exploitation of loopholes and aggressive tax avoidance. The plans were dropped in March this year, however, with officials preferring to wait for the G20 group to implement wider tax reforms.