Boris Johnson suggests UK will side with US over Huawei exclusion 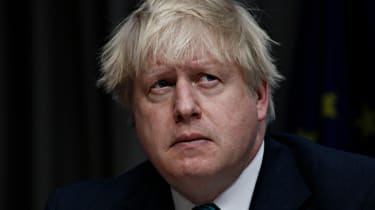 Speaking at the 70th annual Nato Summit, Prime Minister Boris Johnson suggested that the UK may join the US in snubbing Huawei's telecoms equipment from national infrastructure.

Johnson said he won't make a firm decision until after the UK's General Election on 12 December has taken place, but his comments to world leaders at the Watford Nato meeting suggested the Chinese company's equipment posed a security risk.

"I don't want this country to be hostile to investment from overseas," said Johnson, as reported by the Guardian. "On the other hand, we cannot prejudice our vital national security interests nor can we prejudice our ability to cooperate with other Five Eyes security partners. That will be the key criterion that informs our decision about Huawei."

Among the chief supporters of a Huawei ban is President Donald Trump's US, a member of the Five Eyes alliance. Trump is also a figure Johnson never referenced directly despite fielding eight questions concerning the US leader.

Johnson said he spoke to 'numerous' countries and asked about their thoughts around including Huawei in their own nation's infrastructure.

He specifically referenced Italy, saying "they look like they are not going forward with [accepting Huawei equipment]".

"Everybody I have spoken to is not going forward, but how many countries can I speak to? Am I going to call up and speak to the whole world? We are building it, we have started, but we are not using Huawei," he added.

A number of European countries are still 'open' to using Huawei's telecoms equipment, according to recent reports.

Government officials from Germany have confirmed that no single vendor will be excluded from consideration to supply the nation with technology, although security will be heavily scrutinised before making any purchasing decisions.

French Junior Economy Minister Agnes Pannier-Runacher recently confirmed in an interview that France too will ignore the warning posed by the US surrounding the alleged security issues Hauwei's equipment presents.

"We're confident the UK government will continue to take an objective, evidence-based approach to cyber security," said a Huawei spokesperson at the summit. "Our customers trust us because we supply the kind of secure, resilient systems called for by the Nato Declaration and will continue working with them to build innovative new networks."

The issue with excluding Huawei's equipment from the UK, a country which heavily relies on the Chinese company's technology already, is that it would involve a costly and time-consuming replacement process that would damage the exisitng economy.

"If the decision is made to exclude Huawei from the 5G network, this issue can't be solved with a solution as idealistically simple as just swapping it for an alternative vendor immediately, especially as this would really require the retrofitting of previous mobile generations equipment as well," said Jimmy Jones, telecoms cyber security expert at Positive Technologies.

"If Huawei is taken away as an option, this whole process - including testing - would have to be started all over again," he added. "Ultimately any country that does that is facing a more expensive network and a delay that could result in its national infrastructure being inferior compared to other countries, and therefore making their economy less competitive."

Johnson's government announced in August this year that it planned to make a final decision on Huawei's potential inclusion in national infrastructure by Autumn of this year.

Now in December, the decision has yet to be made and it's one which might not be made until early 2020, depending on the results of the upcoming General Election.

The National Cyber Security Centre's (NCSC) concerns about the security of Huawei's equipment were cited in a 2018 report from Huawei's Cyber Security Evaluation Centre (HCSEC).

The NCSC has shown Hauwei equipment failed to meet its security standards and gave Huawei instructions to rectify this in updates. The Chinese company has since failed to address these concerns adequately and instead developed a five-year roadmap to fixing all the raised issues.

So far, out of the Five Eyes alliance members, only the US and Australia have committed to excluding Huawei's technology from their respective countries.

The US has been heavily outspoken on its stance on the Huawei saga. President Trump has urged the world to join the US in banning the company's equipment and even threatened those who refuse.