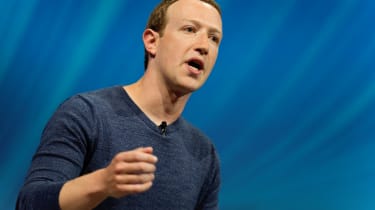 Following a short meeting with the Facebook chief, the European commissioner for internal markets and services Theirry Breton suggested that the EU shouldn't adapt to Facebook’s demands, but vice versa.

He rejected out-of-hand a paper prepared by Facebook, according to Reuters, in which the firm criticised the threat of 'intrusive regulations'. Instead, the platform favours more flexible rules which would demand that companies regularly report harmful content, and publish enforcement data.

Moreover, Zuckerberg failed to address his company’s market dominance and the responsibilities of his platforms.

Zuckerberg, who runs a vast social media empire comprising Facebook, Messenger, WhatsApp and Instagram, on Monday suggested that social media giants should be judged as if they were in between a newspaper and a telecoms firm.

“I do think that there should be regulation on harmful content ... there’s a question about which framework you use for this,” Zuckerberg said during a Q&A session at the Munich Security Conference.

“Right now there are two frameworks that I think people have for existing industries - there’s like newspapers and existing media, and then there’s the telco-type model, which is ‘the data just flows through you’, but you’re not going to hold a telco responsible if someone says something harmful on a phone line.

“I actually think we should be somewhere in between.”

Zuckerberg has previously dipped his toe into the well of regulation, putting forward a series of proposals in the past as the regulatory climate against social media platforms intensifies.

The Facebook founder claimed in April last year there should be a set of new regulations and standardised systems in areas beyond just data protection, which has seen reinforcement following the introduction of GDPR.

There should, for example, be a set of common standards across borders, with enforceable rules, that compel social media platforms to get to grips with the uploading and sharing of ‘harmful’ content.

The European Commission’s vice president for values and transparency Věra Jourová, who also met with the Facebook CEO, similarly backed the idea that Facebook cannot expect to bend the will of regulators to suit its agenda.

“Facebook cannot push away all the responsibility,” she said. “Facebook and Mr Zuckerberg have to answer themselves a question ‘who do they want to be’ as a company and what values they want to promote.

“It will not be up to governments or regulators to ensure that Facebook wants to be a force of good or bad.”

The European Commission is expected to announce proposals tomorrow that are aimed at challenging the market dominance of companies like Google and Amazon.

These may build on draft proposals issued in January that set out ambitions to create a data-centric single market to make it easier for companies to tap into the bloc’s large volume of industrial and professional data. They’ll also be accompanied by draft proposals that govern the use and applications of artificial intelligence.

The EU has been toying with a range of ideas regulating tech companies, particularly when it comes to compelling platforms to remove harmful, illegal or extremist content. Proposals have been publicly discussed under different guises for years, with one idea shared in 2018 involving compelling companies to remove content within an hour.

Last July, the bloc proposed rewriting the rulebook on how to engage with Big Tech altogether, touting the suggestion of a new ‘Digital Services Act’. This would give the EU a raft of legal powers to influence how social media platforms govern content that falls into the bracket of hate speech or extremist-inclined.

The UK has also previously hinted at a form of tech regulation, although proposals initially announced in 2019  were significantly watered down last week when the government released its response to public consultation. Under the new plans, the telecoms and broadcast watchdog Ofcom would be given license to police Silicon Valley giants, as opposed to an entirely new regulator as was previously suggested.