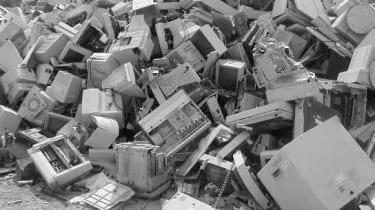 The European Union has revealed ambitious plans to cut down on electronic waste, with the goal to ensure new devices can be easily repaired and recycled.

Commonly referred to as e-waste, some 50 million tonnes of it - comprising everything from smartphones and laptops to fidges and toasters - is produced every year, with that amount set to hit 110 tonnes by 2050.

That date is particularly pertinent, as the EU plans to be ‘climate neutral’ by the same year.  As such, its Circular Economy Action Plan (CEAP) has been revealed, which contains ambitions to introduce regulation that electronic products are designed and manufactured to be easily repairable if they malfunction or have components that need replacing as they age.

A lot of devices currently on the market, such as Apple’s iPhones, make heavy use of adhesive in their construction, which can make them difficult to repair, and professional repairs can end up being very expensive. This usually forces people to replace their broken phones rather than getting them repaired, exacerbating the e-waste problem further.

The CEAP also wants to combat “premature obsolescence” which can see some electronics companies essentially lower the lifespan of their devices, or limit the features they can support, in order to encourage people to buy the latest model from them.

Another core part of the plan is to ensure that electronic devices are increasingly made from recycled materials, rather than fresh materials, as this not only cuts down on e-waste but also could also reduce the need for EU nations to import raw materials and components to create their devices. As such, the concept of a ‘circular economy’ could have economic benefits as well as environmental ones.

“To achieve climate-neutrality by 2050, to preserve our natural environment, and to strengthen our economic competitiveness, requires a fully circular economy,” explained executive vice president for the European Green Deal, Frans Timmermans.

“Today, our economy is still mostly linear, with only 12% of secondary materials and resources being brought back into the economy. Many products break down too easily, cannot be reused, repaired or recycled, or are made for single use only. There is a huge potential to be exploited both for businesses and consumers.”

E-waste is a particular problem, as not only do discarded electronic devices contribute to landfill, they can also release hazardous chemicals and materials into the environment. So the CEAP could go some way to mitigating that.

However, as it currently stands the CEAP is just a plan; there are no set targets or regulations in place, and according to Stephane Arditi, the European Environmental Bureau policy manager for the Circular Economy, measures to enforce the plan will be needed to make it effective.

“Now the EU institutions and governments need to turn these promises into laws to ensure the absolute reduction in carbon emissions and resource use,” said Arditi. “We only have one planet and yet we consume resources as if we had three. It’s time to do more with less.”

While Apple has touted its heavy use of recycled material in the construction of its iPhones, there’s still more the technology industry can do to reduce the amount of e-waste.