H.R.6940 aims to ensure the US stays ahead of China 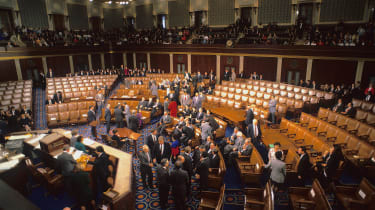 Recently, U.S. Representative Bill Johnson of R-6 Ohio introduced the Advancing Tech Startups Act. Also known as H.R.6940, this act is part of a larger effort put forth by Energy and Commerce Committee Republicans and would require the Department of Commerce to lead a study focused on the state of innovation in the U.S. The bill also aims to ensure the U.S. remains ahead of China in emerging tech.

According to Johnson, the Advancing Tech Startups Act promotes “a national strategy for encouraging more tech-focused startups and small businesses” within the U.S. He also remarked that a study on the state of innovation within the country would be immensely helpful in identifying recent innovations by technology startups and small businesses nationwide.

The Advancing Tech Startups Act would also require a number of surveys in which federal agencies identify who has jurisdiction over the creation, development and growth of tech startups. Other surveys would address how competitive the U.S. is in comparison to its international neighbors while also surveying supply chains that might impact the creation and growth of tech startups in the U.S.

The proposed bill would also require the U.S. Department of Commerce to report any federal rules or regulations that might impact a burgeoning startup to Congress. The department would make “recommendations for a comprehensive plan that promotes growth and development of technology startups and mitigates risk to marketplaces and supply chains,” according to a statement related to the bill.

“This legislation promotes a national strategy for encouraging more tech-focused startups and small businesses in all parts of the United States,” Johnson explained. “We simply can’t rely on China – or anyone else. And, we don’t need to. While we must ensure our supply chains are resilient in a global economy, we must also be self-sufficient in critical areas. It’s time to fully unleash the American spirit of innovation and entrepreneurship to ensure we are.”

Johnson added, “this legislation will identify and illustrate where innovation and technology are currently being developed in the US, and what barriers may be preventing technology startups and small businesses from thriving outside of areas like Silicon Valley. It’s vital that we, as a nation, tap into American deep reserves of talent and ingenuity that are present all across the country.”

The Advancing Tech Startups Act isn’t the only anti-China endeavor U.S. politicians have embarked on in recent weeks. The Trump administration has also mounted a large effort to ensure the U.S. doesn’t have to rely on China for its tech solutions and was recently lauded by Republicans for the Taiwan Semiconductor Manufacturing Company’s plans to build a U.S.-based chip factory.