Trump claims he can shut down social media companies, but that isn’t necessarily true 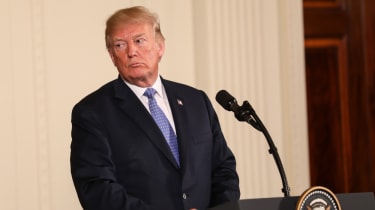 President Donald Trump is no stranger to slinging controversy on Twitter. This week, however, marked the first time that the company took action against him by marking two of his tweets as containing misinformation. How did President Trump handle the labeling of these tweets? Trump threatened to shut down social media companies altogether.

While he’s drafted and signed an executive order that challenges rules aimed at protecting these sites from litigation, Trump can’t actually shut down Twitter, Facebook or any other social platforms that he’s deemed as unworthy.

For President Trump, the issue at hand really comes down to the First Amendment. The President has frequently accused Twitter of censoring conservative voices, and he echoed this sentiment in response to Twitter labeling his tweets as containing misinformation, tweeting that “Big Tech is doing everything in their very considerable power to CENSOR in advance of the 2020 Election. If that happens, we no longer have our freedom. I will never let it happen! They tried hard in 2016, and lost. Now they are going absolutely CRAZY. Stay Tuned!!!”

The thing is that Twitter’s a private company, meaning it’s in no way violating the President’s First Amendment rights by labeling his tweets. Unlike the government, Twitter can moderate its users’ speech as it pleases. It can also do so without legal penalty, much to the President’s dismay.

While President Trump likely won’t be successful in shutting down social media companies altogether, he could certainly make it harder for the platforms to operate. As reported today, President Trump has drafted an executive order targeting Section 230, a law that protects tech companies from litigation over user content.

Regardless of what happens, President Trump has already used the labeling of his tweets to bolster his claims that tech companies aim to silence conservative voices. The President may also use the labeled tweets to distract the public from other issues: the coronavirus pandemic, the dwindling job market and even the upcoming election.