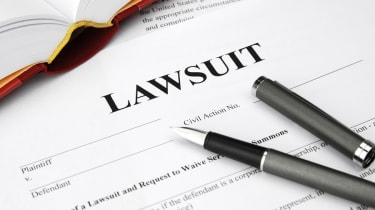 Apple is in hot water after Shanghai Zhizhen Network Technology Co. announced today it’s suing the tech giant in a Shanghai court for an estimated 10 billion yuan ($1.43 billion) in damages.

The company alleges Apple’s products, namely those equipped with Siri, violated its virtual assistant patent, which has a technical structure similar to Siri’s. As part of the suit, Shanghai Zhizhen has requested Apple halt the sales, production and use of products in violation of the patent.

In June, China’s Supreme Court ruled Shanghai Zhizhen owns the patent for the virtual assistant in China. Fang Jianwei, a former Chinese judge, told The Wall Street Journal that should Shanghai Zhizhen apply for a preliminary injunction, the court could ban Apple from selling products equipped with Siri in China during the trial. However, Fang explained, Chinese courts rarely grant such orders.

For Apple, China is its most important foreign sales market, as it’s second only to the US Sales in China accounted for roughly 16% of Apple's Q3 revenue, which added up to $9.33 billion.

The patent infringement suit isn’t a first for Apple. The company has faced multiple lawsuits concerning intellectual property in China. In 2012, it agreed to pay $60 million to settle a trademark dispute with Proview International Holdings Ltd., which claimed ownership of the “iPad” name in China.

Apple is facing a patent lawsuit in the US, too, with headphone manufacturer Koss is accusing Apple of infringing on five wireless headphone patents. The claim was made against AirPods and Beats wireless headphones and, according to Koss, the infringement has caused the company irreparable harm.

To remedy the situation, Koss asks courts to award it an unspecified amount in damages “that compensates it for such infringement, which by law cannot be less than a reasonable royalty, together with interest and costs.”