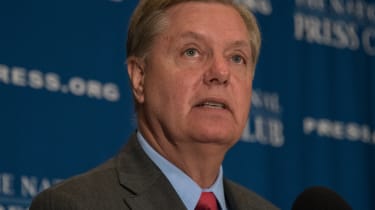 A group of Senate Republicans introduced legislation on Tuesday to take away some of the protections Section 230 of the Communications Decency Act provides social media companies.

The Online Freedom and Viewpoint Diversity Act would require social media companies to have an “objectively reasonable belief” that the content being removed violated a specific policy or be held liable for their moderation actions.

“For too long, social media platforms have hidden behind Section 230 protections to censor content that deviates from their beliefs,” said Wicker.

“These practices should not receive special protections in our society where freedom of speech is at the core of our nation’s values. Our legislation would restore power to consumers by promoting full and fair discourse online,” Wicker continued.

Graham added, “Social media companies are routinely censoring content that to many, should be considered valid political speech. This reform proposal addresses the concerns of those who feel like their political views are being unfairly suppressed.”

“Why does Twitter leave phony pictures like this up, but take down Republican/Conservative pictures and statements that are true? Mitch must fight back and repeal Section 230, immediately. Stop biased Big Tech before they stop you!” Trump said about an image that transposed McConnell’s face onto a Russian guard in Moscow’s Red Square.