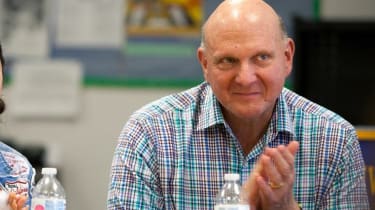 Former Microsoft CEO Steve Ballmer has suggested that any regulatory reforms from Congress will not result in the breakup of big American tech firms.

Ballmer went as far as to say he'd "bet money that they will not be broken up," according to CNBC.

His comments come in response to Tuesday's congressional report that called for regulatory changes to be introduced in order to 'rein in' the market power of Google, Facebook, Amazon and Apple, which have each been accused of creating monopolies that hamper competition.

Ballmer, who was Microsoft CEO from 2000 to 2014, has plenty of experience with anti-competition cases having led the tech giant through a lawsuit in the early noughties. However, he isn't convinced the latest calls from Congress will lead to any major changes.

"I don't think the case of Apple is the same as Google is the same as Amazon," Ballmer told CNBC's Squawk Box. "In a sense putting them all together makes good theater but it doesn't necessarily mean good policy."

"I would certainly recommend to all these tech companies to engage on the issues now, to engage with the regulators now. I do not think they can just take unilateral action and expect it to satisfy whatever it is some regulator or congressman will decide they should have done. The key is to engage."

Part of the problem, according to Ballmer, is that these companies are too different and what they are being accused of will not fit neatly into one overarching piece of legislation.

Although all are accused of using their size and market dominance to squash competition, it's done so in varied ways. For instance Apple has been accused of forcing third-parties into its App store with heavy fees and rules that can result in exclusion if not adhered to. That's different from the accusations about Google's search and advertising practices.

"As I read the concerns - just me as a non-antitrust lawyer reader - I don't even think this notion of breaking them up answers most of the questions that people are raising, or many of the complaints they're raising," Ballmer added.