The Charter now has 90 signatories, as well as new funding from DCMS 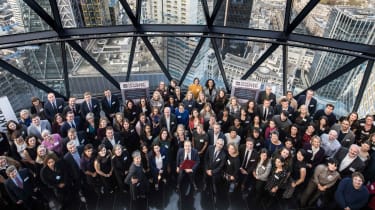 The Tech Talent Charter, which was first launched two years ago, comprises a series of pledges designed to encourage more diversity within the tech industry, with a particular focus on the gender imbalance.

The Charter is backed by a board of directors and a steering committee made up of representatives from the various businesses and organisations that have pledged to uphold its values and principles. Ninety companies have now signed the Charter, including Nationwide, HPE, HP Inc. and Monster.

The Department for Digital, Culture, Media and Sport has also recently signed, and has awarded the organisation a grant to help scale up and expand its efforts. Matt Hancock, the government's minister of state for Digital, spoke of the Charter's importance at an event today celebrating the news.

"I believe very strongly that you can't catch all the fish if you only fish in half the pool," he said. "And making sure that we allow everybody to have the opportunity to fill those jobs that are increasingly available; it's only if we do that that we will expand opportunity across the country and also do the job of filling the skills needs of the tech industry."

"A vastly disproportionate number of people going into the tech industry are men. And sorting that is, yes, about changing the education system, but it's also about changing the culture and opening up, inviting in. Because diversity may be about opening the door, but true inclusivity is about welcoming people into the room. And that's where we've got to get to, and that's where the tech industry has to get to."

TechUK president Jacqueline de Rojas pointed out that a larger and more diverse pool of talent will help address the country's growing skills gap - a looming challenge that many industry experts have been warning about.

She also said that while increased diversity is and should be its own reward, various signatory members were also keen to point out that being more inclusive has concrete business benefits associated with it.

"Productivity on its own is a reason why we should; one woman on the board of a business can reduce the risk of bankruptcy by 20%, just as an example. Gender-balanced teams are 60% more likely to be more productive. Saleswomen are more productive - they reach their targets more often than men."

While the Tech Talent Charter was established around two years ago, its directors and signatories emphasised that this is just the beginning of its journey, and that much more work is still to be done.

Tech Talent Charter CEO Debbie Forster told IT Pro that her aim is to get 500 organisations signed up to the charter by this time next year. "It's been amazing. When we said that we would reach a hundred by Christmas, I really gulped. That really felt like a crazy bet when we were, five months ago, 19 members."

In particular, Forster and the other directors are aiming to encourage many more SMEs and startups to get involved with the Charter. As TechUK's de Rojas argued, SMEs are the backbone of the British economy, and Charter director Sinead Bunting said that getting them engaged with the Charter's mission early on can have a huge impact.

"If we're able to influence that huge tranche [of SMEs], that is where we'll really make the difference," she told IT Pro. "At the very start, the culture of a company is really formed... if you can get in there right at the start of the startup, then you can really start to effect change from the grassroots up."

One of the common questions around improving diversity is where companies should start, and the general consensus among the signatories and directors that IT Pro spoke to was that the initial step is showing willing. De Rojas, for example, advised appointing a dedicated person whose job it is to engage with the Charter and other matters of diversity.

"The first step is to get hiring right," said Tech London Advocates founder Russ Shaw. "Founders should consider blind hiring, where education and names are omitted from candidates' CVs, and look beyond their immediate network to source candidates."

However, some signatories also pointed out that there are approaches that don't work. HPE's EMEA vice president of HR, Jane Keith, said that forced quotas and promoting staff preferentially based on their gender was an offensive concept, while Global's director of technology David Henderson found that when his company implemented blind hiring, they just ended up using tools like LinkedIn to reverse-engineer who the application was from.

The main takeaway from talking to the individuals and organisations involved in the Tech Talent Charter was that while the backing of government bodies like DCMS is a welcome vote of confidence, the private sector needs to pull together to address its systemic gender diversity and inclusivity problems.