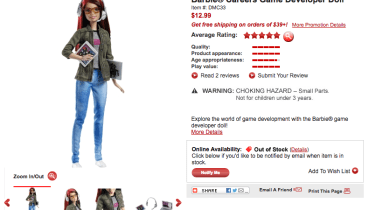 Mattel's new game developer Barbie model has sold out in the US after its introduction earlier this month, as the doll tries to become more representative of the jobs women do.

Barbie has had more than 150 careers since her introduction in 1959, but game developing is the 2016 Career of the Year Barbie.

She has bright red hair, big glasses and wears a t-shirt, jeans and white trainers. More notably, she can actually code. Molly Proffitt, CEO of Ker-Chunk Games, worked with Mattel to ensure the doll was "believably techie," reports the Huffington Post.

As a result, online debates have been sparked by those trying to figure out what software and languages Barbie is using on her laptop. 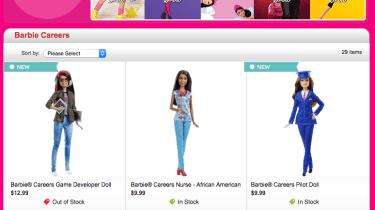 Game Developer Barbie is sold out on Mattel's website

"She's using an engine that only exists in the world of Barbie, which is more brilliant than I had initially imagined when Mattel first started envisioning her world," said Proffit in a post she published about the doll. "The design is influenced by a multitude of engines and tools game developers use as well as educational tools to teach programmingFrom Scratch, to Alice, to Unity, to the Unreal Engine, to Animate (formerly Flash), to HTML5 games."

Proffitt added that Barbie is not one specific type of developer, but rather "a representation of programmers in games which means she could know C#, C++, JavaScript, PHP, you name it".

"From her box art to her laptop, it is clear she knows multiple languages, platforms, and tools and while that may be JavaScript or ActionScript if put in a different context outside of her custom engine, she could still have written her game in C# if she wanted to. For me, that is the real magic," added Proffitt.

It is a big step up from the Computer Engineer Barbie and her corresponding book "Barbie: I Can Be A Computer Engineer," from a few years ago. In the book, Barbie not only needs the help of boys to make her game design idea "real," but also relies on them when she accidently infects her computer with a virus. It caused a lot of outrage, according to Slate's Casey Fiesler, especially from women working in technology.

The doll's arrival comes as organisations focus on bringing more women into STEM fields, including coding. Projects include Google's Made With Code, which provides young girls with a platform to learn computer programming skills, and many others such as Girls Who Code, Black Girls Code and the UK-based Code First: Girls.

Game Developer Barbie certainly is not having any problems selling, listed as out of stock on Mattel's website and currently listed on eBay for as high as $169.99.