Women in tech: when the media isn’t helpful 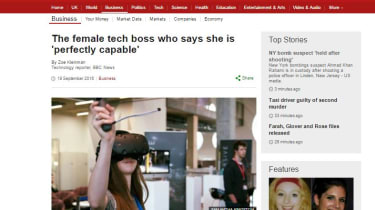 There's one time when it's best to treat women in tech like one of the guys: not at the strip club for lunch (yes really, and that's not cool) or in "bants" around the office (unless you know they're down with your "jokes"), but in the media.

On one hand, the BBC profile of VR marketing start-up founder Samantha Kingston is good news: it highlights on a global platform a talented woman who's clearly found success in the technology world. On the other hand, the language used is "perfectly" disappointing.

Let's start with the headline: "The female tech boss who says she is perfectly capable'."

Ten words, and so many problems.

First, the news in this case isn't Kingston's successful start-up, or her thoughts about the potential of virtual reality, as it would be with a male subject. Rather, the focus is the fact she's female. That is her accomplishment, it would seem.

Second, not only is she a women in tech, but it's (apparently) news that she's good at it, that she's "perfectly capable". As though that was ever in doubt in the founder of a company.

It isn't news. It's obvious if she's running a company that's a success, she's surely "capable" by definition. (And surely I can't be the only one who sees something in quote marks and automatically reads it as sarcastic, though I'm sure that's not the intent.)

Third, look at the phrasing. Our evidence of her capability isn't her evident success, but her own word on it Kingston "says she is" able to do her own job. A headline used elsewhere on the site describes Kingston as "the female tech boss who says she is just as good as the men". That emphasised workd introduces doubt, and raises the question of whether other people would agree.

I'd argue she's better than many men or women, the combination of which are called "people" at their jobs, which is why the BBC is taking the time to talk to her.

Imagine a profile of a "male nurse who says he is just as caring as the women" or a "male teacher who says he's good' at his job".

If those make you flinch or sound ridiculous, so too should the headline on Kingston's profile. Now try it with any descriptor beyond gender. Would you put that in a headline? Of course not.

The rest of the story  which you may notice is written by a woman  follows in a similar tone, which is a shame. By all means, celebrate women for succeeding in an industry that doesn't favour them, but if Kingston's worth writing about - and she is - then focus on her accomplishments. Her startup is the story, not her gender alone.