With stints at Facebook and Google, Sandberg is one of the most influential people in Silicon Valley 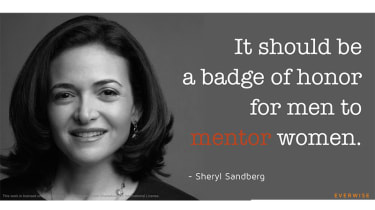 Throughout our Women in Tech Month we will be profiling a number of truly inspirational individuals who have made an outstanding mark in their respective fields.

Today we are focusing on Sheryl Sandberg, one of the most influential players in social media. She is ranked by Forbes as the 7th most powerful woman in the world, and with an estimated net worth of over $1.4 billion, she's also one of America's wealthiest.

As current COO of Facebook, Sandberg oversees the business operations of the world's most popular social media website, ensuring the company caters for its 1.7 billion active users around the world. Arguably, a great deal of its success lies at the feet of Sandberg, who has helped transform the company since her arrival in 2008.

She joined Facebook when it was four years old and only just breaking even in earnings reports, struggling to grasp a solid strategy for making money. One problem was that users considered accounts as their own private spaces, free of intrusion, yet Sandberg knew future profitability lay in advertising. Just months into her appointment, she had managed to convince Facebook's executives that more discreet advertising techniques were needed. By late 2009 Facebook was 'cash flow positive' with over 300 million users, signaling the start of its relentless push towards market dominance. After just four years, she would be appointed to the board, becoming its first female member.

Despite her status as one of the biggest names in the tech industry, Sandberg is all about business, and has demonstrated a consistent knack for creating profit throughout her career. Before Facebook, Sandberg served as vice president of online sales at Google, joining in 2001 when the company operated in relative obscurity from a small business unit in Silicon Valley. In just six years, Sandberg would help turn the internet search engine into one of the most influential companies on the planet, overseeing numerous high profile deals and expanding consumer services like Google Books.

Sandberg's influential career began in politics rather than tech, though. After graduating with a BA in economics, and later earning her MBA at Harvard, Sandberg assisted the US Secretary of the Treasury between 1994 and 2001. During the Asian financial crisis in 1997, Sandberg helped lead the effort to relieve mounting pressure from international debt, avoiding economic stagnation in the developing world.

Sandberg's move into the tech industry in 2001 made her a rarity, particularly in Silicon Valley where many companies were staffed entirely by men. In her 2013 book titled 'Lean In: Women, Work and the Will to Lead', Sandberg chronicles her rise to prominence in a male dominated industry. The book, which became an international best seller, argues that the situation for women has improved little from the 1980s. Discrimination, sexism and harassment are still commonplace, although she believes many women are held back by their own ideas of gender roles.

Inspired by her own experiences of rising through the ranks as a woman in tech, and as a pregnant COO, Sandberg has since worked with campaign groups to ensure greater opportunities for women globally. She is a current serving board member for the humanitarian organisation Women for Women International, and the global activist movement V-day, which aims to end violence against women.

For many, Sandberg is much more than a businesswoman. She demonstrates what is possible, by rising through the tech world with the odds stacked against her. As a campaigner, motivational speaker, best selling author, and significant driving force behind the world's largest social media platform, Sandberg has broken new ground for women in the business world.