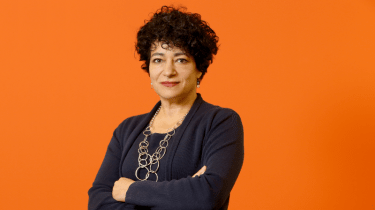 Jane Silber is CEO of Canonical, a UK software company best known as the producer of Linux-based operating system Ubuntu.

She took some time out of her schedule to talk with IT Pro about her career and women working in the tech industry.

How did you become CEO of Canonical?

I started my career in technical roles; I was a software developer for several years and then began to move more into management positions and got more interested in what it takes to run a company and bring together the different disciplines that are required to build and run a successful tech company. So I have had a series of roles, all tech related, but in different fields a health risk-assessment startup, a Japanese company that was trying to enter software as a new line of business, defence contracting and command and control systems for a while, all leading up to Canonical.

I joined Canonical at the very beginning Mark Shuttleworth was founding the company and just putting together the initial team. I joined as COO at that time, Mark was CEO, and really have been here for the entire ride, from the first couple of years working out of Mark's flat in London with a very small team and now growing the company to about 800 people.

I became CEO in 2010 at a time when Mark shifted into a full-time products strategy role and we continue to have a very effective partnership as leaders of the company.

You've had quite a varied career then?

There have certainly been different domains and different verticals, but there are also common threads certainly tech and specifically software is a common thread across everything I've done.

I've always been interested in software, I was a maths and computer science major at university and my first couple of roles were as a developer, so I'm very at home in the software world. I'm also very at home in growing companies; much of my experience has either been with startups growing to be medium-sized companies or medium-sized companies growing up to be large companies. That necessity to do something new, to find an opportunity and a product and market fit, which really dramatically changes the landscape, that entrepreneurial spirit, even when working in a larger company, as I did in Japan, is something that's important to me.

It's interesting now at Canonical, we're 12 years old and I think it would be a stretch for us to call ourselves a startup at this point, but we still and operate very much like a startup in terms of our desire to disrupt the status quo, our desire to really produce something that's game changing in terms of technology and what it allows people to do, and the innovation that can occur on top of a platform like Ubuntu. So I think that combination of software and what it enables you to do and the right cultural fit of an organisation that's dynamic and fast moving and really out to change the world in some way are both common threads across everything I've done, even though it has been in a variety of verticals and specific domains.

While you have come up through a 'traditional' tech route, there's anecdotal evidence of women facing fewer hurdles in upcoming areas and specific niches like data science and cyber security. Have you seen any evidence of that?

I hadn't heard of that and I don't know of any data to support it, but I can intuitively believe that in a green field opportunity or a field where everybody's new, women are more equally represented. There's not really 10 years of people being data scientists already, so I can see it starting out on a much more equal basis.

If it is true that it's happening today, it will also be interesting to see if it remains that way or if women drop out. There are a lot of statistics around the more traditional tech routes showing that women do start in the field, but have a much higher dropout rate and change careers earlier on than men. There's something in the workplace culture that, even when they persevere through the educational and cultural and societal barriers to start their career as a developer, forces many of them out much more quickly than men.

I have come up through that more traditional route and I think there are still barriers. I don't think it's a simplistic challenge, it's a multifaceted problem and there's no single solution or panacea. Some of it is self-reinforcing; I have nieces who are high school and college age, and I when talk to them and other young women I'm in contact with, they will say things like "well, I don't know if I want to go into computer science because it's all men", so there is some of that. But I think there absolutely still is bias and challenges in educational settings and in workplace settings that tend to either discourage women or not give them a platform from which they can contribute on an equal basis. I feel like it's improving, for sure, but I think anybody who says it's all solved and fine now is fooling themselves.

There are good examples and good role models out there and we're fortunate to have some great women technical leaders working for us here at Canonical, but the overall statistics in the industry and frankly at Canonical as well are still disappointing.

There are women leading seriously big name technology companies, though. You're CEO of Canonical, there's Meg Whitman at HPE and there's also Ginni Rometty at IBM.

I think the presence of high profile women is important and the women CEOs and leaders are a sign of what's possible. But I think people's immediate experience junior programmers coming in, college students deciding whether to major in computer science or people charting out their career path and whether they want to stay in a technical role is much more influenced by their manager and their team. That's where those demographics of around 20% or less being women and the non-diverse workforce really have their destructive impact. As much as Meg Whitman is high profile, I bet there're not that many HPE employees who interact with her on a day-to-day basis. So as you traverse the organisation, people's view of their employer and view of their company is hugely influenced by the people they work with every day much more so than the CEO. As much as I would like to say I have complete influence over the company, I know that I don't in that regard!

That's not to diminish the value of having women leaders and I think, even if you don't know that person, they show there's a path and prove it's possible.

Are there other benefits of having women in leadership roles in the tech industry?

I think it's important for company performance too. There's a statistical correlation between the number of women a company has on its board and its performance, not just because they are women, but because it brings diversity of opinion and experience.

That said, it's really a problem that needs to be solved at all levels of an organisation, not just with a certain representation at the top or on the board, and that's part of what's such a shame about the dropout rates.

This Q&A is part of IT Pro's Women in Tech Month, which runs until 2 December. Find out more here.