A 1940s super-hacker whose work saved hundreds of lives 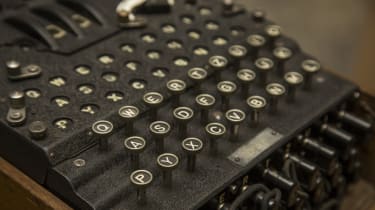 Although she was one of the earliest women to forge a fully-fledged career in tech, many may know Joan Clarke best as the one-time fiancee to Alan Turing, portrayed by Keira Knightley in 2014 film The imitation Game. Clarke was much more than just Turing's friend and confidante, however; she was every bit the mathematician he was, and the role she played alongside him at Bletchley helped save countless lives.

Sadly, while Clarke's career was long and storied, it was also marred by sexism and discrimination, beginning during her education at the University of Cambridge. She studied at Newnham College, one of only two colleges accepting women, where she received a double first in mathematics and became a Wrangler - one of the college's highest honours.

However, despite being one of the highest-achieving students in her year, she was denied a full degree. Until 1948, women graduating from Cambridge were awarded a diploma conferring the title afforded to their male colleagues, but denying them the same status within the college.

After her graduation, she was recruited by her former academic supervisor to work as part of the war effort at the Government Code and Cypher School, a fore-runner to the modern-day GCHQ. Within a week, she was working as a cryptanalyst in Hut 8 at Bletchley Park, alongside Turing and others.

Clarke's first promotion was to the grade of 'linguist', possibly due to the lack of official positions for senior female codebreakers - although Clarke recalled another woman working at Bletchley in a similar role. She recalled fond memories of pointedly filling in a questionnaire with the response "grade: linguist; "languages; none".

The task of Clarke and the other members of Hut 8 was to crack the 'Enigma Code', a set of cryptographic ciphers used by the Nazis to communicate during the Second World War. Specifically, they targeted the German navy, with a particular emphasis on the Nazi submarines that were persistently harassing the Allies' transatlantic supply runs.

The Nazi navy used Enigma machines, which turned messages into complex, randomised strings of letters that were much more sophisticated that other encryption methods. In order to help crack these codes, Turing developed a cryptanalytic process known as Banburismus, named after the paper on which the cipher texts were recorded.

Clarke was widely regarded as an expert practitioner of this technique and Hut 8 head Hugh Alexander - himself considered the best 'Banburist' at Bletchley - hailed Clarke as one of the best in the section. In fact, the second ever naval code cracked in Hut 8 was broken by Clarke and she often became so engrossed in her work that she was reluctant to relinquish the ciphers at the end of her shift.

Her job was extremely high-pressure. The codebreakers in Hut 8 would receive encoded messages from German vessels shortly after they were sent and had to break them as quickly as possible in order to determine where the Nazi subs would strike next. Decoded messages almost immediately resulted in military action and Clarke's work helped sink numerous U-boats.

While working at Bletchley, Clarke and Turing became good friends. They connected on an academic and intellectual level and Turing said that he could talk to her "as to a man", a sentiment echoed by the other male codebreakers at Bletchley. He asked her to marry him, confessing his homosexuality to her shortly after he proposed. She was unsurprised and had in fact suspected the truth for some time. The engagement ended cordially after six months, although the two remained friends.

She was respected enough by her peers that they regarded her as an 'honourary man', but that respect evidently did not extend to fully crediting her work. The second phase of the Yoxallismus method, used to establish the plugboard wirings of Enigma machines, was developed by Clarke but not attributed to her. It was instead known as "pure Dillyismus", which experts presume was named after (male) cryptographer Dillwyn Knox.

By 1944, Clarke was one of just four codebreakers working in Hut 8 and the only woman. She went on to be named the deputy head of the section and though she was awarded an MBE for her war work in 1947, she later speculated that her difficulties regarding career progression were largely due to her female sex.

After the war, Clarke continued her work at what was by that time known as GCHQ, where she was widely regarded as one of the best cryptanalysts in the organisation. Though she left for a ten year period following her marriage to a fellow GCHQ member, she later returned and worked there until retiring at the age of 60.

Unfortunately much of Joan Clarke's glittering service record remains shrouded in secrecy, due to the highly sensitive nature of her work. What we do know, however, is that not only was she one of the first female codebreakers, she was also one of the greatest, and her legacy is a testament to the fact that women should be taken just as seriously as men.