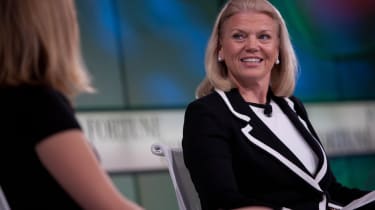 Ginni Rometty is the current chairwoman, president and first female CEO of IBM.

Rometty graduated from Northwestern University in 1979 through a scholarship offered by General Motors (GM), graduating with a high-honours degree in mechanical engineering, having previously attained a Bachelor's degree in computer science and electrical engineering.

After she graduated, she worked at GM for two years, during which she met her husband, Mark Anthony Rometty.

Rometty started working at IBM as a systems engineer in 1981 and has now been working there for 35 years. She went on to lead IBM's sales and marketing division, before becoming senior Vice President in IBM's consulting unit.

At the end of 2011, she replaced Sam Palmisano as CEO of the company. She is credited with introducing IBM's cloud services, analytics, and 'cognitive computing', including the company's "Watson" artificial intelligence platrorm.

At the time of his departure, Palmisano spoke highly of Rometty, saying: "She brings to the role of CEO a unique combination of vision, client focus, unrelenting drive, and passion for IBMers and the company's future. Ginni is the ideal CEO to lead IBM into its second century."

He also told The New York Times that her gender had nothing to do with her being appointed as CEO. "Ginni got it because she deserved it", he said.

Rometty says her husband has helped and supported her throughout her career. In June 2015, during a speech at her alma mater, Rometty told the audience how her husband reacted when she was hesitant accepting a job.

"He said: 'Do you think a man would have answered the question that way?' He said: 'I know you. In six months you'll be ready for something else.' And you know what? He was right. And I went in the next day and I took that job."

In public speeches, Rometty also speaks highly of her mother, saying she inspired her to work hard and always push her limits.

In an interview with American talk show host Charlie Rose, Rometty said: "What I always learned from my mom was never let anything or someone define who you are."

At the 2016 Grace Hopper Conference Rometty spoke about the excitement she felt after a healthcare CEO praised the Watson programme. The big-data AI was one of the initiatives she invested most of her energies in and she saw it as a huge bet since its debut.