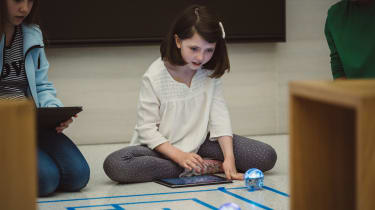 Apple has announced that budding coders will be able to use its educational programming app Swift Playgrounds to control drones, robots and other connected devices.

The tech company has partnered with toy-makers like Lego, Sphero and Parrot in order to let kids practice their coding skills on real-world hardware.

From within the Swift Playgrounds app, kids can use real Swift code to control devices like the Lego Mindstorms Education EV3 range, which lets them create programmable robots, vehicles and creatures out of Lego.

"Today we're combining efforts with Apple to provide even more students around the world with the opportunity to learn how to code," said Lego Education president, Esben Strk Jrgensen.

The Sphero SPRK+ robotic ball will also be controllable via the app, as well as several additional robots, musical instruments and Parrot drones including the Mambo, Airborne and Rolling Spider.

"More than 1 million kids and adults from around the world are already using Swift Playgrounds to learn the fundamentals of coding with Swift in a fun and interactive way," said Craig Federighi, Apple's senior vice president of software engineering.

"Now they can instantly see the code they create and directly control their favourite robots, drones and instruments through Swift Playgrounds. It's an incredibly exciting and powerful way to learn."

The new functionality will be rolling out in the Swift Playgrounds 1.5 update, hitting the App Store on Monday 5 June. The app is compatible with all iPad Pro and iPad Air models, as well as the iPad Mini 2 and its successors, provided they're running iOS 10 or above.