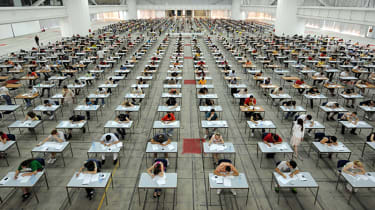 The British Computing Society (BCS) has warned that the number of computing students could fall by as much as 50% by 2020, with experts blaming the shortfall on a lack of government investment in teacher training.

Its warning comes after school exams watchdog Ofqual released figures last week showing that there has been only a 9% increase in the number of GCSE students taking the new Computing qualification, while fewer took the ICT course.

Although the number of GCSE Computing students has risen by 9% compared to 2016, hitting 69,350 pupils, entrants to the ICT course have fallen by almost 18% from 74,750 to 61,500, representing an almost 10% decline in the total number of students studying Computing.

"This is deeply worrying," said BCS education director Bill Mitchell. "Computer Science was only introduced three years ago and is still a new subject for schools. The number of students taking GCSE Computer Science should be growing very rapidly as schools improve their offering to students and students realise the relevance of the subject for whatever they might be doing in the future."

The new Computing qualifications is replacing the old ICT GCSE, which is being phased out after criticisms that it didn't do enough to give students digital skills. Whereas the ICT GCSE focused on generic IT skills, the new curriculum is more focused on fundamentals like programming and logic.

Experts blamed the 10% overall drop in numbers on a lack of investment in teacher training and support for the new curriculum.

"We must ensure that schools are properly equipped to provide the best possible options for students at GCSE and that includes Computer Science," Mitchell said. "Our view is that will only happen where we make sure teachers are getting the right professional development to make GCSE Computer Science a success."

Alongside the BCS, the Raspberry Pi Foundation played a substantial role in developing the new Computing curriculum, and has also put significant work into training teachers in how to properly approach teaching the subject.

Founder Eben Upton told IT Pro that the government is not doing enough to assist teachers in making the jump from teaching the old ICT course to teaching Computing.

"On some level, it's a shame that it's left to organisations like us and the BCS to do this, because it's a primary government function to make sure that the people of the country are properly educated. But insofar as the government is asleep at the wheel, we and the BCS and a number of other organisations have been pushing forward."

"Businesses are already grappling with huge challenges around cyber security and artificial intelligence and it's vital that our education system equips the next generation to fill these roles. It's time for industry to reach out and provide work more placements, support and training in schools to help inspire students to pursue careers in the increasing critical technology industry."

However, both Upton and Mitchell cautioned that more data is needed before any definitive predictions can be made about the general trend in Computing education. A-Level entrants to Computing-related qualifications saw a net jump of 10%, for example, and applicants to Cambridge's Computing course have doubled since 2012.

A Department for Education spokesperson told IT Pro: "We want to raise standards of achievement and participation in STEM subjects to ensure our future workforce has the skills to drive the productivity and economy of this country. That's why we have introduced the new computer science GCSE, which has been designed with input from industry experts to develop pupils' computational thinking skills needed for today's economy, including coding and important IT topics such as data storage, networking and cyber security."