Anything you can do, AI can do better

As AI starts to infiltrate the workforce, it’s time to ask - are we replaceable?

You'd be hard pressed to find IT news these days that doesn't mention artificial intelligence (AI). Stephen Hawking, Bill Gates and Elon Muskcontinue to warn people of what a world with perfected AI might look like, while sci-fi films like The Terminator and The Matrix bring these fears to the big screen. But still AI research pushes on.

Debates about AI capabilities often boil down to whether or not Artificial General Intelligence (AGI) can be achieved. The definition of AGI is heavily debated, but primarily refers to a machine with the same intellectual capabilities as a human. Also known as strong AI, such a technology would possess the complete range of human cognitive abilities, including self-awareness, sentience and consciousness. On the other hand, weak AI, which is what we have now, is non-sentient. Human brains and Weak AI can both compute, but only the former can understand what it computes. Many researchers doubt that AGI is even possible and without it, machines will never truly achieve genuine human intelligence.

It seems like the dystopia of The Matrix isn't likely to become a reality anytime soon, so for the time being you can stop having nightmares about Agent Smith. But according to the Bank of England's chief economist, Andy Haldane, there are still evil robots lurking in the shadows. Their inventors? Your co-workers. Their target? Your jobs.

Haldane warns that structural shifts caused by developments in AI technology could pose a major threat to the UK labour market. In a speech to the TUC, he estimated that "up to 15 million jobs could be at risk of automation" in the UK alone. After all, robots may never be able to do everything we can do, but who said they have to? Employers aren't likely to care that the machine working for them understands what it's doing, as long as it's doing it well.

Which jobs are at risk? 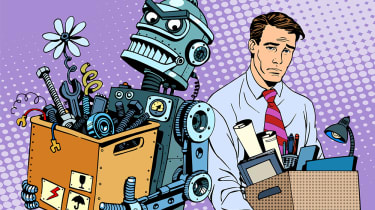 A global survey of AI experts anticipates the technology will outperform humans in many activities over the next ten years. The study, conducted by the Future of Humanity Institute at the University of Oxford and the Department of Political Science at Yale University, predicts that machines will soon be better at translating languages (by 2024), writing essays (by 2026), driving a truck (by 2027), working in retail (by 2031), writing a bestselling book (by 2049), and working as a surgeon (by 2053). It also predicts there's a 50% chance of AI outperforming humans in all tasks within 45 years and of automating all human jobs by 2040.

If you're already in the workforce, this could relieve you after all, you might not be working in 45 years and you won't be around to watch your grandchildren's grandchildren suffer through unemployment. But when it comes to predicting the automation of individual sectors, anticipations are anything but reassuring.

It should come as no surprise that industries where physical labour is a major component of the cost structure are the most vulnerable. Human transport and storage services, which currently employ 1,558 people in the UK according to the Office of National Statistics, may soon be replaced by self-driving vehicles and automated warehouses like the one being used by Ocado Technologies. Construction and manufacturing positions, which currently employ over 5,000 in the UK, are also easily automated. Even agriculture is feeling the heat as cow-milking robots and other machines pop up around the globe. AI in the workplace creates greater efficiency, which in turn reduces the number of necessary employees. A decrease in human presence in the workplace causes a decrease in human-created mess, meaning machines and AI robot presence will drastically reduce or eliminate the need for building maintenance positions.

STEM positions are in just as much trouble and not even the scientists and engineers developing these machines are safe. The global survey report estimates that in roughly 88 years, AIs will be researching and developing themselves. According to an inquiry by the UK government's Science and Technology Committee, reskilling the population is essential to respond to AI automation trends and ensure the job security of thousands. Google's AI research unit, DeepMind, told the committee: "[One of the] most important steps we must take is [ensuring] that current and future workforces are sufficiently skilled and well-versed in digital skills and technologies, particularly STEM subjects." 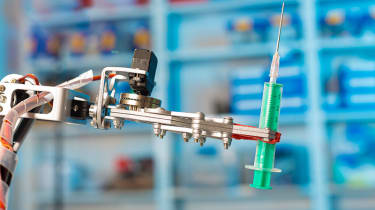 Processes important to the 'health' part of healthcare are already being automated. In partnership with the Imperial College Healthcare NHS Trust, Google DeepMind has already developed an app to help quickly diagnose kidney disorders in patients. Although the app was found by the ICO to have violated data protection laws in its initial trial with Royal Free, AI legislation is anticipated to prevent future controversies. More accurate diagnoses are not the only advantage of automated healthcare. While a human surgeon's movements could be affected by fatigue, stress, or even an unexpected sneeze, a robot's movements can be perfected and entirely controlled.

A lot of people want to believe that the 'care' part of healthcare isn't as easily automated and plenty of IT experts anticipate job safety for careers requiring emotional intelligence (EQ). Ian Pearson, leading futurologist of Futurizon and fellow of the World Academy for Arts and Science, is one of those experts. "AI and robots can automate intellectual and physical tasks, but they won't be human, and some tasks require the worker to be human", said Pearson in a Futurizon blog. "A human will always be able to identify with another human on an emotional level better than a robot can." According to Pearson, humans aren't only better in EQ fields like therapy, but patients also prefer humans over robots to fill these roles.