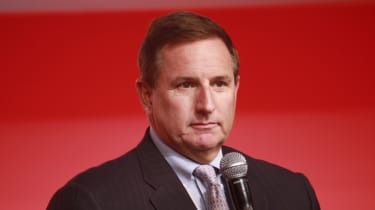 Hurd had been in the role for nine years but was forced to take a leave of absence in September due to ill health.

The cloud giant has confirmed the death but told IT Pro that it is not commenting any further.

Instead, Oracle co-founder Larry Ellison posted a tribute on Hurd's website, calling him a "close and irreplaceable friend and trusted colleague".

"Oracle has lost a brilliant and beloved leader who personally touched the lives of so many of us during his decade at Oracle," Ellison said on Friday. "All of us will miss Mark's keen mind and rare ability to analyse, simplify and solve problems quickly.

"Some of us will miss his friendship and mentorship. I will miss his kindness and sense of humour. Mark leaves his beloved wife Paula, two wonderful daughters who were the joy of his life, and his much larger extended family here at Oracle who came to love him. I know that many of us are inconsolable right now, but we are left with memories and a sense of gratitude...that we had the opportunity to get know Mark, the opportunity to work with him...and become his friend."

In September Oracle surprised many with an earlier than expected release of its quarterly earnings. The company then hit investors with a double shock as Hurd announced the board had accepted his leave of absence request for an undisclosed illness.

Hurd shared the CEO role with Safra Catz, who took on sole duties following his departure, with Ellison handling some of his responsibilities during the transition. What's more, the announcement came a few weeks before the firm's annual conference, Oracle Open World 2019, where Hurd's absence hung over the proceedings.

"I would just like to take a moment and say how much I miss Mark Hurd, personally," said Ellison, during his keynote address. "We've worked together for a long time, I love him, and I wish him a speedy recovery."

Mark Hurd became a well-known figure in the technology industry, having played a major role in some of the sector's biggest firms.

Hurd started his career in 1980 as a salesman for National Cash Register (NCR) and worked his way up to CEO during his 25-years at the company. He left in 2005 to become HP's CEO, one of the biggest personal computer manufacturers at the time. His five-year stint saw the company's share price double, but his tenure was rocky with a number of controversies, culminating in his departure following a sexual harassment claim.

Despite the troubles, Hurd had a friend in Ellison, who quickly came to his defence and criticized the HP board in a letter to the press, saying it had "just made the worst personnel decision since the idiots on the Apple board fired Steve Jobs many years ago".

He joined Ellison's company in 2010 as president and replaced him as CEO in 2014 in a joint position with Catz. Hurd is survived by his wife Paula, whom he met at NCR, and their two daughters.