We learn about the technology infrastructure which powers Yodel 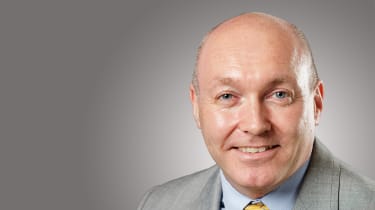 Adam Gerrard has a bit of a tough job on his hands. He’s the chief digital officer for parcel delivery firm Yodel, so not only does he have to ensure that Yodel’s many customers are able to accurately track their orders and communicate with the delivery drivers in real time, he’s also responsible for expanding the company’s efforts in the B2B2C sector.

As well as delivering packages, Yodel is now offering logistics technology services to many commercial partners and retail businesses, but all of this involves a lot of IT resources. It’s Gerrard’s job to manage that resource to deliver the outcomes that the business needs. We sat down with him to learn more about how he’s making that happen.

Well, we're pretty much hybrid. We went down the private cloud route about three years ago, the rationale being we have a lot of legacy, a lot of the systems talk to each other. And you couldn't just hoik something up into to the public cloud, because the amount of bandwidth to keep everything talking whilst you're doing that would have been phenomenal.

So we created a private cloud and leveraged the Cisco FlexPod technology to allow us to build that infrastructure and migrate all our applications across. Then once we were in a cloud, so to speak, we were able to put the bridges and the links in that allow us to burst out into the public cloud. Through various broker services, now we can scale on demand. And we also take on certain applications that are already cloud based, that we're able to just plug into the infrastructure and make things talk more uniformly.

What’s your biggest priority within the business?

We do still have quite a lot of technical challenges around legacy systems. So replacing our legacy estate with a more digitally transformed set of applications that are much more flexible and allow us to leverage services in many, many different ways that we can't do today. I think that's quite key for us, as is maximising the use of data.

We've got a massive Internet of Things, which provides masses of data into a data lake. And this is all starting to come together so that the data is feeding our more digital apps. And it's helping our clients better serve their consumers, as well as giving us a lot of insight about various retail verticals that we wouldn't normally have been able to see from the data.

Which piece of technology would you say is most critical to achieving this?

It's an interesting one, because there are so many moving parts in there. I think the newer ways of working that the IT communities have moved to in the past 10 years. So being fully agile, having complete continuous integration and the ability to deliver code instantly, through test environments and to live, I think that's been really, really essential for us to be able to deliver at pace so that's been a real key technology to deploy. But in terms of what's holding us back, I think at the end of the day, it's probably just our bandwidth, because you can't change everything at once.

Do you have any preferred technology vendors that you especially invest in?

I wouldn't say we gravitate towards anybody, actually, we look at what's in the market and what's best to serve our needs at the time. So we do use some of the big Tier One vendors - like IBM and Microsoft, Teradata, people like that - but we also use niche providers. We work with startups where appropriate if there's an interesting tool, technology or data application that can allow us to accelerate what we want to do as a business.

I think the biggest technology issue we're facing is just some of the age of our legacy systems. And the fact that nobody's producing people who understand how to code in the ways of the dark arts of the 80s, and 90s. That in itself is a huge technology issue, because we do have to keep the lights on on those systems. It's things like Intermix and Unicode and things that people don't tend to want to use anymore. And it is not just the code and the ability to produce code; it's just understanding how code was written back then, and how routines were put together.

Which part of your IT estate are you proudest of?

First and foremost, I'm proudest of the team, because I think we've built a really, really strong team. And they've delivered all these wonderful things; they did probably one of the biggest and fastest Windows 10 migrations, they implemented the FlexPods, and they moved us to a private cloud at pace when we absolutely needed to, because some of our infrastructure was more or less on fire.

But if I'm from looking at it in the round, I think some of our digital deliveries in the last 12 months have really been exciting. Like our Xperience products, which allow retailers to use API hooks into all our capabilities that we offer, both online and in mobile technologies - so that’s kind of us moving towards becoming a tech company.

What’s the next big project you’re planning on undertaking?

I guess the biggest thing we're working on at the moment is handheld technology for the drivers and the colleagues who work under the roof. We really want to modernise that and move away from some very clunky devices that have been used in the industry for quite a while to a much more user friendly experience. And to also link it through to our mobile technology for consumers so that we can get the driver and the consumer closer - because ultimately, our role is to get a parcel to a consumer on time, where they want it, in fantastic condition. And to do that, we can leverage technology a lot more as an industry than we have done in the past.

Personally-speaking, are you a Windows, Mac or Linux user?

I like the Windows operating systems because they're fairly intuitive and easy to use, but my background also means that I'm used to the Unix way of working. And I think if I had to pick a preference for day-to-day working, it's whatever's easiest - so usually Windows these days. I think with the level of investment we've made with Microsoft over the past 10 or 15 years, we've kind of built up that skillset and momentum around doing things in a Windows world, which is why that one suits us best at this moment in time.

In the last ten years, what technology has made the biggest impact on the IT industry, and why?

The mobile phone. I would say that's by far the biggest advancement we've seen in technology; just the whole shift to being able to work and process things on a mobile phone with the speed and power that they have these days. And there are people that can run a business off a mobile phone. I mean, the amount of processing power in your pocket is unbelievable.