How the cloud cooled my phone's meltdown 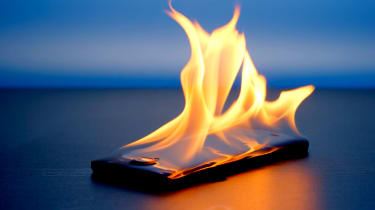 Technology is a pain in the posterior. It waits until you're at the very precipice of breaking point and then breaks. Hence, last week, in the midst of a deadline cataclysm, my phone decided to have a meltdown. Almost literally.

I first realised something was up when I felt a warm sensation in the trouser region. Given that I'm not quite yet of the age when 'little accidents' occur, I concluded it must be the phone in my pocket. And given that phone is a Samsung Galaxy, I got it out pretty sharpish.

I tried all the usual overheating remedies: killed all the open apps, restarted the phone, scoured the settings for battery hogs, but nothing was working. A deep dive into the settings revealed that 'Google Services' was thrashing my phone's processor, but with literally no more information to go on, and a phone that was chomping through battery at a rate of a 10% every 30 minutes, I had no option but to thrash it and start afresh.

This gave me flashbacks to the days of Windows XP. Remember when you used to have to reinstall the operating system every year or two because your computer accumulated so much cruft it took 10 minutes to do anything? Well, smartphones have now reached that stage. Once in a while, you need to manually chuck out the rubbish they're incapable of clearing out for themselves.

I wasn't too concerned about factory-resetting my phone because I had two backups of all my data. Google keeps a backup of all Android handsets by default and Samsung practically insists on taking a backup of its own for good measure. The last time I moved handsets, the Google backup reinstalled all my old apps on the new phone within minutes. It was like moving home and finding the removal men had put all your furniture back in the right place and made you a cup of tea to boot.

Sadly, things didn't go quite so smoothly this time. Google didn't even offer to restore my data during the phone's setup. And although Samsung stepped into the breach, offering to restore all my apps, photos, contacts and the like, attempts to restore from its backup where plagued with 'server errors'. I could only restore parts of my data.

At first, the language in Chez Collins was a tad fruity. I was preparing to rip a branch off a nearby tree, go the full Basil Fawlty and give my obstinate Galaxy S7 a 'damned good thrashing'. But after I'd calmed down and started reinstalling apps manually, I realised this wasn't such a disaster after all.

Unlike the days of Windows XP, when all our data was stored on the device and a faulty backup was very bad news indeed, these days everything is stored in the cloud. Email, photos, social-media accounts, documents - all you need do is reinstall the app and enter your login details, and everything is basically back to how it was. We don't look after our own data these days. We get Dropbox or Google or OneDrive or Facebook or whoever to take care of it for us.

My phone's now running like new with battery life back to almost two days. That mini-meltdown might be the best thing that ever happened to it.