With Workplace, is Facebook’s move into the enterprise complete?

The company's offering is a serious business collaboration contender 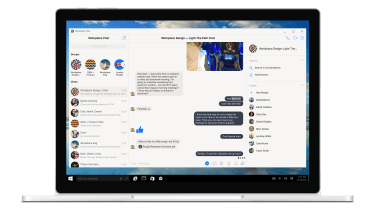 Late last month, Facebook's collaboration tool, appropriately named Workplace, was revealed to have been adopted by more than 30,000 organisations since its launch in 2016. This is notable for a few reasons, not least of all the rapid rate of growth for the tool the number is double that of just six months earlier and has somewhat quieted those who were sceptical that such a consumer-focused social media company could transition effectively to the enterprise space.

Facebook was underestimated by many, it seems, and was correct in its assumption that widespread personal use of its platform could translate to professional use.

"Facebook's advantage in the space is similar to the advantage Google had when it launched its collaboration tech offering a decade ago: it's a powerful name with a well-known, widely-used product. And that gets them a foot in the door where other upstarts in the collaboration space may struggle," TJ Keitt, senior analyst at Forrester, tells IT Pro.

David Benjamin, VP and general manager for EMEA at Box one of the organisations partnering with Workplace also pointed to the familiarity of the product as a reason for its success: "As the way we work continues to change, so should the tools that help us get that work done quickly and securely, both internally with colleagues and externally with partners and clients," he explains.

"Workplace presents an exciting opportunity for enterprises and developers to capitalise on the consumer technology we're familiar with, providing an experience and tools that improve productivity, while meeting the highest compliance and security standards."

One burning question is whether Facebook's success with Workplace means the company will begin a larger transition away from the consumer market. A desktop chat app has already been added to the product's repertoire and group video calling has been teased.

The brand is currently in troubled waters with user trust being eroded by issues such as so-called 'fake news' and a perceived lack of appropriate response to abuse claims across the platform. Because of this, it's possible Facebook's work in B2B is a strategic move, laying groundwork for a future direction.

Raul Castanon-Martinez, senior analyst for workforce collaboration at 451 Research, tells IT Pro: "Facebook is in a unique position to become a successful provider of enterprise collaboration software. It owns two of the most popular messaging apps globally. This does not automatically translate into adoption of its enterprise offering, but there is no question that the company has become a leading expert when it comes to P2P messaging and user engagement.

"Many of the enterprise messaging applications at least initially positioned themselves as the 'WhatsApp for the enterprise'. This tells us not only which OTT apps they seek to displace, but also which apps are the benchmark they look up to."

However, Facebook's future domination of enterprise collaboration offerings is in no way a foregone conclusion, and a more away from the lucrative consumer market is unlikely.

"While Facebook's touting success with Workplace, I don't think it's by any means a signal that its moving away from consumer users," says Keitt. "Like Google, the overwhelming majority of Facebook's money comes from selling ads targeting the consumers who use its platform.

"From a financial standpoint, there's no incentive for Facebook to turn its back on the 2 billion people whose engagement ... underpins its business model."

Shirley Deutsch, director of product marketing at enterprise video technology firm, Kaltura, added: "It remains to be seen, but it's highly doubtful the success of Workplace is signaling a move away from Facebook's core business. If anything, it supplements it in indirect ways. Additionally, it shows that the opportunity to improve workplace communications is so great.

"Whether Facebook will succeed in making this shift depends largely on its ability to make the transition from a purely B2C company to a B2B company. That's going to be a real challenge."

While organisations such as Slack and Microsoft may be feeling threatened by Facebook's new offering, it's just as likely the added competition will simply inspire innovation at an increased rate.

"The established vendors will proceed as planned" says Keitt. "Microsoft, which has seen great growth in its Office 365 business, will continue to focus on ways to make workers more productive during the day through artificial intelligence and greater integrations between its applications and different sources of data, such as Salesforce or Dropbox.

"I imagine that Microsoft sees Facebook as doing things that could be complementary to the core collaboration and communication infrastructure it provides, opening the door for partnerships or deeper integrations. And Slack, which has been able to grow its user base significantly, will continue to try to expand its messaging capabilities into a fuller communication suite for example screen sharing or voice communication that pulls it out of the exclusive domain of IT departments."

Castanon-Martinez adds: "Microsoft is countering by leveraging its dominant position and market footprint as a provider of productivity software. Slack is looking to position itself as the 'go-to' app where employees ... get their work done and, given the number of integrations, they are well positioned for that.

"I also expect Microsoft will continue to emphasise the benefits of a tight integration within the apps in its productivity and collaboration portfolio. This includes leveraging AI to support business workflows."

Facebook has become a strong contender with Workplace almost while no one was paying attention, due at least in part to its existing familiarity as a consumer tool. We will have to wait and see whether this is a strategy or simply a detour.