The processors signal the future steps for Ryzen chips 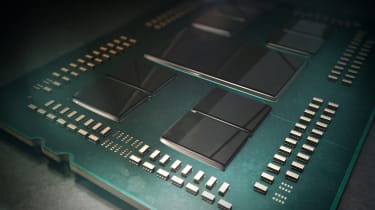 Dubbed "Rome", it brings 7nm manufacturing to the server CPU market for the first time, and is the harbinger of future 7nm Ryzen chips.

"We're taking the power of 7nm tech, we're taking that advantage of doubling that bandwidth and we're bringing tremendous performance," said Dr Su at the launch event. "We're thinking not just about the CPU but about how the CPU connects to the rest of the components."

This, emphasised Dr Su, was just as important as the processor itself. "What Rome does is brings total system capability when you put [the CPU, GPU and interconnects] together."

The new Rome EPYC processors are built on top of AMD's "Zen 2" architecture, with the processor's core complex containing eight core dies, and each of those core dies has eight Zen 2 cores. That translates to 64 cores on the top-end version of Rome chips.

For the moment, however, AMD is keeping quiet on processor clock speeds.

What should this mean in practice? AMD claims Rome will deliver an unprecedented 3x speed increase compared to the previous generation processors in certain applications. "I've been in the semiconductor industry for a long time," said Dr Su, "you don't get 3x."

The company promises an even bigger boost for floating point performance, with speeds four times that of the current EPYC processors.

While demos at launches should always be treated with scepticism, AMD was happy to pit a top-of-the-range dual socket Xeon against a single-socket Rome processor and a current dual-socket EPYC system.

Putting all three systems through the C-Ray benchmark side-by-side, the Rome-based system completed the test in 27.7 seconds compared to 30.5 seconds for Intel's machine and 28.4 seconds for the dual-socket EPYC system.

AMD is already shipping the Radeon Instinct MI60 graphics accelerators to data centre customers, but would not be drawn on price.

The company also claims that Rome has started sampling with customers but has not announced a price or availability other than saying "next year".