How The Entertainer survived Black Friday to record 60% sales growth 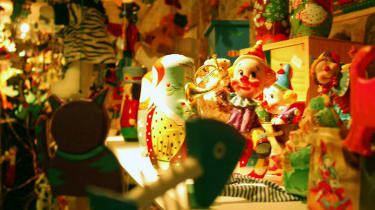 Retailers must work with their service providers to survive online traffic surges to their websites during Black Friday-style promotions, according to the IT director of Britain's biggest high street toyshop.

Sue Dorkin, director of IT and strategic planning at The Entertainer, says retailers have a responsibility to work closely with their contractors if they want to avoid website crashes during peak traffic periods.

Last month saw dozens of websites fall over as shoppers spent a projected 1.32 billion over one weekend, as their infrastructure failed to support the huge amounts of incoming traffic.

One site that didn't crash was thetoyshop.com, The Entertainer's Rackspace-hosted site based on hybris's Multichannel Suite.

The Entertainer makes 20 per cent of its sales online, so ensuring its website was robust enough to cope with peak demand in 2014 was critical.

To do so, Dorkin called all her service providers into a room back in March 2013.

She says: "There is a responsibility with your service providers to work with them.

"As retailers we have a responsibility to take our capacity planning seriously. Going back a few years, if a website falls over, you fix it, that's what customers expected.

"But now the expectation is that you will be there all of the time, and the performance will be acceptable for those who complete their transaction."

Together with The Entertainer's IT contractors, she started evaluating the website infrastructure for weak spots.

"We spent quite a few nights running synthetic customer journeys through the live sites," she explains.

"Don't test in a test environment that doesn't emulate your live environment because it will never give you the same answer."

Running those thousands of fake customer journeys pushed the website's capacity to breaking point, and helped the toyshop decide how to strengthen it.

The measures taken by The Entertainer addressed everything from when to deploy extra capacity for the Rackspace-hosted site to tweaking the code underpinning its delivery options.

"We put in extra servers, we upgraded our database, we did a physical upgrade on our database of all the management systems. We even went through and audited all the critical web service calls between the website and the order management system because we knew if you get a bottleneck there, you're dead," adds Dorkin.

But it quite literally paid off. The Entertainer's website did not crash once during Black Friday, Cyber Monday or the run up to Christmas - and recorded a 60 per cent growth in sales compared to 2013.

In contrast, retailers John Lewis, Argos, Currys, Game, Sainsbury's and Waitrose all failed to cope with online demand over those peak periods.

Marketing director Phil Geary says: "The site didn't go down on Black Friday, when others around us seemed to be collapsing."

For Michael Barker, the CTO of Fine and Rare Wines, traffic in busy periods is a different problem, with the retailer experiencing fewer transactions than the toyshop, but orders on average hitting 1,000.

He says: "Performance management and capacity planning is absolutely crucial to any business online.

While Dorkin and her team managed to roughly predict the traffic levels of Black Friday, they were left exposed by the unprecedented popularity of a toy based on Disney's hit film Frozen.

The Entertainer had 3,000 units of Disney's Elsa doll, but they sold out in just two hours that's 40 dolls per minute, with 16,000 open sessions running at once as people tried to bag themselves one.

A total 31,000 people asked the toyshop to email them when the toy was back in stock.

Without the requisite measures to help the site support the sheer volume of visitors, thetoyshop.com crashed.

"We couldn't have planned for or even predicted the Elsa Day," says Dorkin. "Whatever way you cut it, you knew it was going to be a virtual stampede when it happened.

"We did have a momentary meltdown that was the only time we had to take the site down over the whole of peak. But we didn't take it down for long."

Rackspace was fast to resolve the database issue, and The Entertainer was back online in half an hour another consequence of having a close working relationship with your service provider.

Dorkin warns that customers no longer have any tolerance for websites falling over, and believes that retailers must improve their offerings as more shopper go online.

Brands have also made things more difficult for themselves by plugging sales days like Cyber Monday and Black Friday, she adds.

Black Friday was the chain's biggest online payday this year, with traffic up 167 per cent and sale volumes up 200 per cent on last year's biggest day, Cyber Monday.

Dorkin said: "We've created a real challenge for ourselves. Now the message that retail in general is sending to customers is wait till Black Friday'."

Problems in the few days before Christmas resulted in many customers missing deliveries altogether, according to a survey of 2,400 people from supply chain management company JDA and YouGov.

Nearly one in three experienced delivery problems, with 49 per cent of those citing missed deliveries and 45 per cent pointing to late deliveries, as retailers' supply chains collapsed.

Fine and Rare Wines CTO Barker points out, that as online shopping becomes more popular, it is important not to overlook supply chain management.

"Our problem is, we can't just stick a bottle on a DHL or a Yodel. It has to have damage control, special care and packing," he said. "Certain companies are cheaper in certain areas. We use our knowledge of that and spread the risk."

He claims the infrastructure challenge is easier to address than the physical one, in that only so many trucks can fit on a road.

"We're still a long way away from true scalability - both from a technology and an end-to-end retail perspective," he contends.

"Still we don't seem to be able to reap the full benefits of true scalability. Whether that's website integration, CRM database, backend or whatever, all the way through to supply chain scalability as well."

Perhaps as a result, consumers seem to be turning increasingly to Click & Collect, where shoppers can pick up orders in-store to avoid delivery costs (and delivery problems). The JDA/YouGov survey suggests that 39 per cent of Christmas shoppers used this option in 2014.

The toyshop's policy promises such orders will be ready to collect within 30 minutes, supporting that pledge by putting five tablets in every store, which let staff manage those orders from an app.

The introduction of tablets has helped the toyshop cut down queues, too, with staff able to put through purchases via a chip and pin app on some of the devices, then emailing the customer their receipt.

Marketing director Geary adds: "You're actually collecting data from people in the queue - you're able to profile them a lot more than at the till."

At Fine and Rare Wines it's a similar story, says Barker, with 30 per cent of online transactions coming from a mobile device, usually an iPad or iPhone.

He said: "When we delivered the website it just had to work on every device. That's just a given, that's a hygiene factor these days."

While having a mobile-friendly website is vital to getting customers to visit, getting them to come back is another challenge altogether.

The answer to that problem is not loyalty cards, but personalisation, Barker claims though he hates the term Big Data.

"People are very imprecise and flippant with their terminology. Data is utterly irrelevant and trivial information is the important thing," he says.

"What can you gain from knowing that a person has purchased three times this month? It's about data to information, information to knowledge, i.e. we know you as a person, we know more about your likes and dislikes, then moving from knowledge into action."