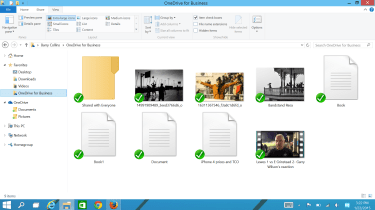 Google Drive is a toe-to-toe rival to Microsoft's OneDrive. Whilst Microsoft's online sync and storage service has the advantage of being embedded into later versions of Windows, Google has to work harder to convince consumers to download and install its software. Like Microsoft, it also has a separate version of Drive for businesses. Does Google Drive have the performance and the features to tempt users away from OneDrive? Let's find out.

There's no separating Google and Microsoft when it comes to the amount of storage they're willing to give away, both handing customers 15GB of space for free. Yet, whilst Microsoft's paid-for storage plans top out at 1TB (for which it charges 5.99 per month and throws in a subscription to Office 365 Personal), Google Drive goes much further.

It basically matches Microsoft's 1TB price ($9.99 per month, which is around 6.50 at the time of writing), but goes all the way up to 30TB for a princely $300 per month (just shy of 200). We don't imagine many customers feel the need to store that much data in the cloud, especially at that price, but it's an option for the ultimate power users.

If you have a Google account for Gmail or an Android device, you'll already have your own Google Drive. It may not be pre-baked into Windows like OneDrive, but it only takes a small download to do so, and once it's installed it behaves in a very similar fashion to OneDrive, with the option to drag and drop files to your Google Drive folder and have them near-instantly synchronised on Google's servers and any other devices you've installed Google Drive on.

Everything will be synced by default, but if you're short on disk space on a particular PC, you can choose to only sync selected folders using the Drive app's settings. You can also choose to limit the bandwidth Drive uses on the upload or the downlink a valuable option for those on slow ADSL connections and not one offered by OneDrive.

Sync speed performance is mixed. It took only 27 seconds for a 24MB video file uploaded from one PC to appear on another using a fibre connection with 80Mbits/sec downlink and 20Mbits/sec up far faster than the 1min 25 seconds it took with OneDrive, and even beating Dropbox by 12 seconds. However, it was more sluggish when synchronising a 4MB folder containing 84 different documents: that took Google Drive 2mins 25 seconds, while OneDrive cantered through it in 1min 16secs. That suggests an initial sync of thousands of files would take much longer on Google Drive, but once that's done, it's likely to be snappier in day-to-day use.

Accessing your files via the Google Drive web interface is fairly straightforward, with nice big thumbnail previews of files in the central panel and a list of recent accessed files running down the right. Drive is tightly integrated with Google Docs, Sheets and Slides, allowing you to create and edit files in the browser. Performance here is mixed, however.

Google Docs and Sheets are great for working with others on files simultaneously, with others' edits appearing in real-time as they type. However, support for documents created in Microsoft Office remains suspect. Multiple attempts to open a heavily formatted 72-page Word document caused Docs to crash the browser tab every time, although the same document opened fine in OneDrive's Word app; formatting in Excel spreadsheets often goes awry; PowerPoint presentations are routinely robbed of their slick animations and backgrounds. It's unfair to blame Google for failing to support many of Microsoft's proprietary features, you might argue, but with most of the business world still running on Office apps, the harsh reality is that you've got a much better chance of reliability editing Office files in the browser with OneDrive.

Google also creates its own file format issues. Create a document on the Google Drive website, and it's saved in the .gdoc format, which can only be edited in the browser. You can convert a .gdoc document into Microsoft Word format, PDF or others and download them, but you cannot create a document in those formats from within the browser. That means when you come to open and edit that file from the Google Drive folder on your PC, it opens in the browser you cannot open those files in Word, Libre Office or other more fully-featured software.

On the plus side, Google Drive does offer offline editing, so even if you're working on the plane you can still open and edit your documents from within the Chrome browser. However, certain features are unavailable offline. You can't insert images, for example, nor run the spell checker. A stripped-down word processor becomes even more restricted. In short, we'd avoid creating docs using the web browser, if at all possible.