The building will serve as the company's European base 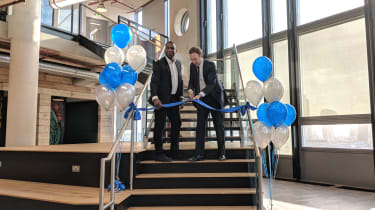 Box's new building will be not just its UK base, but the headquarters for its entire Europe region and the 28,000-square-foot space has been built to accommodate the company's aggressive growth plans, including room for future expansion.

"Our decision to expand our presence here in london was really borne out of a view that this city is the most vibrant tech community in Europe," said Box senior vice president and general manager of EMEA, David Benjamin.

"Shoreditch is fast becoming a center of creativity, innovation and originality which are perfectly aligned to our values here at Box and I'm very confident that this building our new home will act as a symbol of our achievements in the past, our ambitions for the future, but also our determination to create an environment and a space where the most talented people in our industry can do their work."

The office was officially opened by Matt Hancock, secretary of state for digital, culture, media and sport, who praised Box's decision to base its operation in the UK.

"I've followed you since about 2012, when I first heard about the work that you're doing here in London. I'm delighted that you've doubled down on London as the European HQ of Box. I think that is testament to London's vibrancy," he told staff as part of the ceremony.

"You're doing great work not only providing high-quality jobs and vibrancy, and adding to the London ecosystem but helping private companies and vital public services to use technology that's increasingly available to improve people's lives. Ultimately, that is what this technology, used right, can do, and the fact that you're working, for instance, with the Met Police to turn 50,000 police men and women into digital police will help them to keep people safe across London, and that is a classic example of people using tech for good."

The opening of its new headquarters kicks off a busy year for Box, in which it launches several new products, including its first foray into machine learning and artificial intelligence, Box Skills. The company is also focusing heavily on the incoming enforcement of GDPR, Benjamin said, which will come into effect on 25 May. 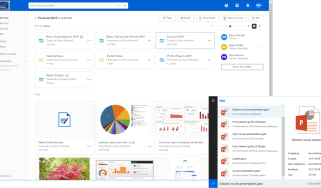