Many initially embark on a cloud journey to reduce costs, but the benefits they enjoy as a result are far more wide-reaching. 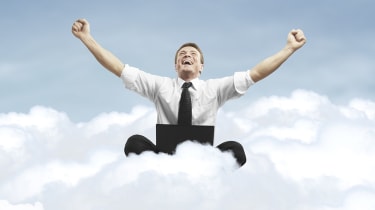 Cloud computing is the future. That much is certain. How much of your future it represents, however, will largely be determined by the type/size of business, sector and just how much legacy technology you're challenged with.

The drivers behind a move either in whole or part to the cloud are mixed. For many, it's about moving with the times tech-wise and, for others, it could be as simple as filling a gap in resources. The main driver, though, for most, is that of overhead reduction.

We live in hard times and businesses especially are under pressure to do more with less. Naturally, this leads to firms exploring ways of cutting costs without adversely affecting performance or customer satisfaction. Cloud is an obvious choice in this respect.

However, those that have gone down the cloud route have ended up with much more than they bargained for. Quite literally. What started out as a pure cost-cutting initiative, has added more value to the business as a whole than any other tech project could possibly have hoped to achieve.

Software-as-a-Service (Saas) specifically is set to boom both in business and cloud terms. Indeed, analyst firm Gartner predicts that the global SaaS market will go from $18.2 billion in 2012 to a whopping $45.6 billion in 2017 that's quite some growth.

Clearly there is a growing appetite for cloud and, in particular, SaaS. So what is fuelling this hunger? Cost may be the main driver, but wider, more long-term competitive advantage, is clearly playing a key role in the momentum cloud is gathering.

Benefits beyond core cost savings are undoubtedly of benefit to many organisations deploying cloud-based solutions. Indeed, the results of an IBM-led survey in 2013 bore this theory out, with 47 per cent of respondents achieving more widespread benefits beyond the initial cost savings anticipated. Clearly, in business terms, the cloud is a high achiever.

1) Pacesetters: These have the highest level of SaaS adoption. As a result, they benefit from the greatest levels competitive advantage given their broad adoption.

2) Challengers: These have adopted SaaS more narrowly. However, as a result they do still benefit from competitive advantage through existing deployments.

3) Chasers: While these businesses have been slower to adopt SaaS and gain the resultant competitive advantage, they still have benefits in sight on the horizon.

The IBM research is interesting on a number of levels, not least because it makes what would otherwise be intimate business thinking about cloud much more transparent.

The prime drivers towards cloud for chasers' and challengers' is definitely TCO reduction, followed quite closely by the lure of enhanced agility. The idea of greater, more beneficial, collaboration, and an overall better customer experience, however, is the draw for pacesetters.'

It would seem, certainly from the research results, that using customer experience as a key gauge, will actually accelerate businesses' success compared with focusing on cost and cost reduction alone.

Often, the disagreement and lack of co-operation between the business and IT department is seen as a barrier to cloud deployment. IBM's research, however, suggests the opposite is true.

Some 70 per cent of the pacesetters' feel cloud has strengthened the relationship between the IT and line of business functions. This is in contrast to just 39 per cent of chasers' who feel the same way. Regardless of the stats you prefer to believe, it's a clear argument in favour of cloud's virtues.

Furthermore, 61 per cent of pacesetters' have enjoyed enhanced internal and external collaboration, with 71 per cent of them confirming business relationships have been improved by SaaS. This is compared to just 34 per cent and 28 per cent respectively of chasers' who've enjoyed the same results.

The majority (72 per cent) of pacesetters' also use SaaS to competitive advantage when it comes to deriving greater insight from otherwise meaningless data.

It's obvious from such results that cloud is of real benefit to the modern enterprise. What the results also reveal is is that those who are deemed pacesetters' get first mover and real competitive advantage as a result of opening their eyes to the benefits and power of cloud computing.

Global managed payroll and outsourcing firm SafeGuard World International is one such company already benefiting from early adopter status when it comes to the cloud. Indeed, by embracing cloud throughout its processes, the firm was able to reduce project implementation time by 20 per cent.

"The one-two social and cloud combination has not only delivered an increase in productivity with our own workforce, but our clients are also reaping the benefits," said Pamela Webb, senior vice president, business services at SafeGuard World International.

"The ability to actively engage and have real-time visibility to project progress in a secure environment really gives our clients confidence in both the implementation process and our organisation."

SafeGuard International is not alone in enjoying cloud-focused benefits.

Virgin Atlantic is big business as far as international (and now, thanks to Big Red, local) travel is concerned. It ferries millions of passengers each year and is always looking to expand its routes.

As such its business simply cannot stand still. This is where cloud computing comes in. SaaS analytics have helped the airline to better map how customers use its website to make travel-related decisions.

In analysing the resultant data, Virgin which hosts some six million-plus passengers each year - was able to better understand the customer journey and therefore ensure future endeavors were more targeted and responsive to travellers' needs.

Often, simple tweaks as a result of this insight, drove massive changes. By simply changing the size of the search panel on the home page of its website, which already boasts in excess of two million users per month, Virgin increased bookings by 10 per cent. Furthermore, by looking more closely at click-through rates, the firm was able to increase the average value of each booking by seven per cent.

"The IBM Digital Analytics solution has really proven its value to our business; we're confident that it will play a key role in completing the Web Futures programme successfully," said Fergus Boyd, senior manager of Virgin Atlantic's e-business strategy.

There are numerous other examples of cloud advocates. Those still sceptical, however, might want to ask some searching questions. IBM has come up with a handy checklist, below:

1) Could broader, smoother and more regular collaboration (both internally and externally) benefit your organisation?

2) Could any of your teams be better at their job given greater insight through big data to aid decision making?

3) Do you have business processes that could be optimised in a better way?

4) Are there any areas where you can speed up application deployment and implementation?

5) When it comes to your current SaaS strategy, do you feel you have enough control and judgement?

6) Could Saas be better integrated as part of a wider cloud strategy in your organisation?

7) When it comes to cloud governance, what changes are required?

8) When it comes to SaaS selection do you have the best IT and LOB minds at work?

9) Are there other areas where IT and LOB could benefit from one another's experience?

10) Looking outside your organisation into the wider market, how can SaaS help you tap into valuable expertise?

So, the question, ultimately, is not whether you want to move to cloud, but how quickly you are prepared to move in that direction. If you hesitate too long, you'll most certainly be left behind.