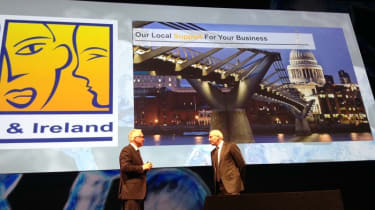 Those aforementioned sales executives could act as access points to that information, Adams adds.

"If they don't have the answers themselves they can certainly be a point of contact for you as a customer. If they can't get those answers then what's their relevance?" he asks.

SAP's Darbyshire is clear on the benefits of SAP's HANA-based technologies, but is keen for users to adopt them on their own terms.

"We would like them to move to it ultimately, but at a pace that's comfortable to them. I wouldn't like to think that we're trying to push it down their throats as technology for technology's sake," he explains.

"You've got to consume technology at your own pace."

Figures revealed at the conference show that 4,100 customers now use the HANA platform, with 7,100 startups developing solutions on it.

And Darbyshire warns that, while customers' technology roadmaps will always be at the mercy of budgets and other factors, they must be prepared to adapt in a fast-changing technology market, saying "adaptability is very important".

United Utilities' Dalton says his company is doing this by changing the way technology deployments are managed.

"In the past SAP has been very much IT-led in our organisation, and very slow to react and understand the drivers," he explains.

"So 12 months ago we established a SAP centre of expertise, and that's to help us move away from major programme deliveries."

He says that large change has been a blocker for smaller change, which gets firms where they want to be more quickly, and avoids large investments that slow innovation and drain IT budgets.

"The intention is to break those major changes up such that we have continuous improvement. Change is small so it stops being a blocker," he concludes.

Another point raised by the user group is that SAP should promote their own methods of helping custopmers adopt newer technology more widely.

New UK MD, Cormac Watters, walked on stage at the conference on Monday to admit that he hadn't known about SAP's cloud extension policy, which allows customers to switch on-premise licenses for cloud subscriptions free of charge, until he joined the company in October.

He said: "I felt a little bit dumb, but it's not my fault, it's actually SAP's fault for not telling me."

Whether or not that's true, the user group study backs up his own experience, finding that just 10 per cent have used the policy, and 23 per cent found it attractive.

Adams hopes SAP will communicate better with users so they understand what their options are, especially as many are already paying for technology they do not use under enterprise license agreements.

"Getting your customers to use [your technology] is bound to create a win-win situation for both parties and help everyone along that road [towards] adoption of new technology and getting value from what you currently have. We're all paying for them. "

The extent of the challenge to SAP is to a large extent a marketing one. The innovations the German database giant is coming up with are exciting, but customers require more access to experts and other users to justify buying them.

In other cases, they simply need to be made more aware of what is currently on offer under their enterprise license agreements something that sales executives hoping to earn a commission may not be so eager to point out.