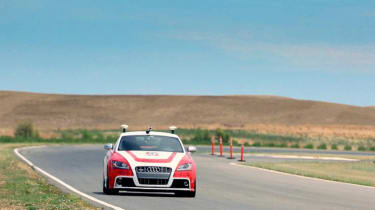 Google and other driverless car makers are in a race to get their machines certified for road use, but a project at Stanford University has already put an autonomous car on a racetrack at high speed in a bid to create safer automatic braking systems.

Professor Christian Gerdes and his mechanical engineering students have been testing their autonomous driving algorithms with Shelley, a custom-rigged Audi TTS, on the three-mile track at Thunderhill Raceway in Willows, California.

The car is capable of hitting speeds of 120 mph, though has predominantly been manoeuvring between 50 to 75 mph. Following iterations on the software, the car is nearly as quick around the track as an expert racer.

These speeds are closest to which most car collisions occur, according to Gerdes. He and his students want to understand how the autonomous car adjusts its throttle, brakes and makes use of all the friction of its tires in different situations to inform the development of automatic collision avoidance software.

Gerdes is a professor of mechanical engineering at Stanford, a university with a storied history of producing graduates who have gone on to create world-changing inventions in technology, politics and the arts.

Several graduates from Gerdes' lab have landed careers in the automotive industry. The professor prioritises student-inspired research on track days and grants his students autonomy to manage their research.

"The students organise themselves like a race team for our test days. They figure out tasks and schedule the time allotted for different tests together," Gerdes said. "But once you get to the track, things can go differently than you expect. So it's an excellent lesson of advanced planning, but also how to come together as a team and deal with changing priorities."

Stanford's effort is the latest in a number of autonomous car projects from private industry and government-backed. The US government's Department of Transport told Google that its autonomous driving system could be considered as the driver' last month, bringing the cars another step closers to hitting public streets.