Could a more hybrid ecosystem see infrastructure move away from the core? 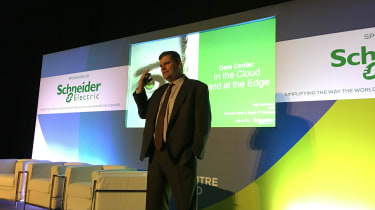 IT architecture must evolve into a more hybrid ecosystem to keep up with demand from more bandwidth-intensive content and the Internet of Things.

This is according to Rob McKernan, senior vice president at Schneider Electric, who used his keynote speech at the Data Centre World conference in London today to say that not too long ago the industry believed that all computing would eventually centralise to the cloud.

In North America, he said, the cloud was quite well built out, with Europe not too far behind and Asia bringing up the rear.

"The cloud was created for the needs of the day but those needs have changed," he said. "The pendulum is shifting back to decentralisation."

McKernan said that this decentralisation was driving innovation faster than ever before and was triggered by an explosion of content and IoT.

"This is putting pressure on bandwidth and the demand on data is growing tremendously," said McKernan.

By 2020 there would be 30 billion connected objects, four billion connected people and nine zettabytes of IP traffic, he predicted. To digest this data the industry would need 45.6 million square metres of data centre space and 57.9GW of power.

A hybrid ecosystem composed of three types of datacentre would be needed to satisfy these needs, he argued.

These smaller data centres closer to the edge would make up for a shortfall of cloud data centres. McKernan said that financial institutions would require this to overcome latency problems with transactions.

Regional data centres would be necessary, especially as more regulation will require data to stay within particular jurisdictions, such as government departments.

"Edge solutions address these issues by putting applications and services closer to users and things," McKernan said. "This ensure companies meet their goals."

He added that IoT can also benefit from edge data centres closer to these types of devices and that IoT would also help in managing such infrastructure.

"IoT and analytics will enable a more effective way to manage and maintain these data centres," he said.

"The future is moving to a cloud architecture of centralised, regional, and localised edge data centre. This will address speed, scaling, and cost."