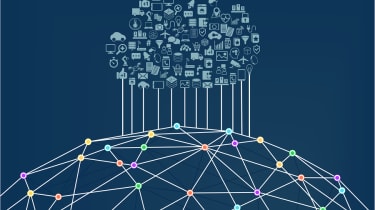 Not all parts of an application can or should migrate to the cloud. In some cases, applications make use of services from partner organisations, connect to third-party services and utilise services and components that are inside the corporate network, where for various reasons they simply cannot be migrated to the cloud.

Even if the core data needs to stay put, it is still possible to effectively leverage compute services from various cloud providers.

As an example, an app which contains sensitive or regulatory data won't be able to be stored in the cloud. But the database can be kept on-premises and the app itself run in the cloud, partitioning the application. This is a truly hybrid app, giving some of the advantages of using cloud services without having to store the sensitive or regulated data off-site.

If a hybrid app is deployed during migration, it is important to think about how the various parts of the app will communicate and whether it is feasible to run an app split between locations. Close attention will also need to be paid to the type of connectivity available, as well as the additional costs involved.

Latency is another a critical concern: it may be a deal breaker if it is too high, since the resulting application performance could prove unacceptably slow. But colocating some infrastructure with an interconnect service typically offers lower latency as well as discounted connectivity.

As pressure to move applications to cloud and hybrid environments intensifies, IT teams must grapple with significant migration challenges. Taking a hybrid approach will help mitigate risks by meeting security requirements both on-premises and in the cloud.