Slack hits $5 billion valuation on its journey to IPO

SoftBank led a $250 million funding round for the collaboration firm 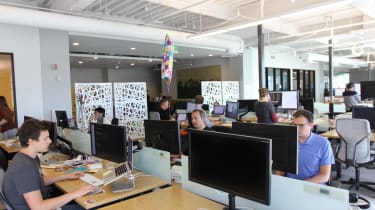 Collaboration giant Slack is now worth $5.1 billion, after raising $250 million in a Series G funding round led by SoftBank.

This brings Slack's total funds raised to $841 million, as reported by the Financial Times, and brings the company closer to its dream of an IPO.

Slack's CEO Stewart Butterfield said: "We believe that Slack is the future of work, and this fund reinforces that - providing long-term operational flexibility and resources that prepare us to run Slack as a cash-generating company and move quickly as the market evolves."

Butterfield told the FT that his company is destined for an eventual IPO, though it would not happen until after 2018. He is worried that it is a young company that may not meet its business targets in the next year, which would "make it a rocky ride in the public market".

He also addressed Microsoft's competitor to Slack, called Microsoft Teams, which was launched last year. He said: "I think we probably have a year or, at the outside a year and a half, before it's really competitive", adding: "It's early in their evolution but I would never discount Microsoft's ability to put resources behind it."

Deep Nishar, senior managing partner at Softbank's Vision Fund said: "Slack is the operating system for today's fast moving businesses, enabling teams to work together effectively at a time when businesses need to be responsive to rapid change and disruption. The Vision Fund is excited to invest in Slack and support its mission to help millions of people, teams and companies collaborate and communicate."

Slack's last funding round was in April 2016, when the company managed to raise $3.8 billion. However, the present valuation is nowhere near the $9 billion Slack was expected to be sold for when rumours that buyers, including Amazon, were going to takeover the startup.

The latest funding round was led by SoftBank's Vision Fund and joined by other investors including venture partner firm Accel.

SoftBank led a $473 million emergent tech investment spree earlier this year as it invested in three companies on the west coast of the US. The fund invested in AI, autonomous driving technology and a farming startup.

In May, UK virtual reality firm Improbable raised $502 million in a Series B funding round led by SoftBank. The company uses cloud-based computing to create virtual worlds for use in games and simulations of the real world.