Azure and Office 365 users were unable to login to their accounts yesterday due to issues with Microsoft's multi-factor authentication (MFA) service.

From 4.39am on Monday until later that evening users in the UK and Western Europe, as well as pockets around the world, were unable to access their Office 365 accounts.

Azure services such as Azure Active Directory was also closed off to users whose organisations enforced mandatory MFA.

Although Microsoft says its services are now operating as normal, this incident has angered organisations trying to convince their employees of MFA's benefits, as well as those who have had to contend with similar outages in recent months.

Any update would be appreciated. Users are starting to search for their torches and pitchforks.

All our months of convincing our customers to have 2FA turned on has gone out the window on the very day we were turning it on....

The cause, according to Azure's status history, lied with requests from MFA servers, sent to a European-based database, reaching operation threshold, which in turn caused latency and timeouts.

Attempts to reroute traffic through North America ended in failure, and caused a secondary issue when servers become unhealthy and traffic was throttled to handle increased demand.

"Engineers will continue to investigate to establish the full root cause and prevent future occurrences."

The firm says it will publish a full analysis of the outage within the next couple of days. 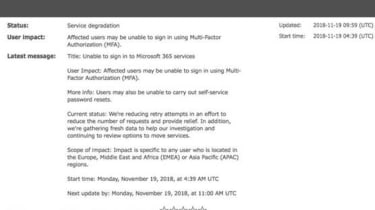 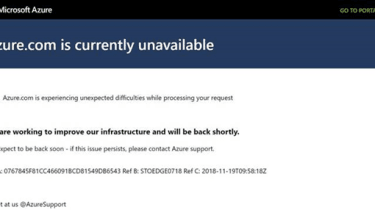 Monday's issues are the latest in a string of prominent Microsoft Azure and Office 365 outages customers have had to suffer in recent months, with the previous incident occurring just three weeks ago.

The days-long outage, which struck in late October, left predominately UK users unable to login to Office 365 due to additional login prompts appearing after user credentials had already been entered.

Another global outage in September affected Azure and Office 365 users across the world after a "severe weather event" knocked one of Microsoft's San Antonio-based servers offline.

"With huge operational dependency on the Microsoft environment, no organisation should trust a single cloud supplier without an independent cyber resilience and continuity plan to keep connected and productive during unplanned, and planned, email outages.

"Every minute of an email outage could costs businesses hundreds and thousands of pounds. Without the ability to securely log in, knowledge worker employees are unable to do their jobs."