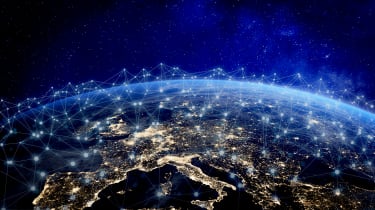 The UK is the sixth largest cloud user among European Union (EU) countries, up one place four years ago, according to research.

British enterprises boast a relatively high rate of cloud adoption, with 41.9% of organisations adopting some form of cloud service, against an EU average of 26.2%. Cloud services were mostly used for hosting email systems, and storing electronic files.

The UK is only beaten by a handful of predominately Scandinavian nations, like Denmark in third place with 55.6%, Sweden in second place with 57.2% and Finland leading the pack with 65.3%.

Statistics published by Eurostat show that UK organisations are outpacing the rest of Europe, on average, with UK cloud adoption representing a 17.9% increase on 2014, against a relatively modest EU-wide average increase of 7.2%.

Meanwhile, public cloud usage among both large organisations and SMBs in the EU-28 generally overshadows private cloud usage, 40% versus 31% for enterprises against 17% versus 11% for SMBs. But these statistics also point to overall cloud usage among larger businesses dwarfing cloud adoption among SMBs.

"Enterprises use cloud computing to optimise resource utilisation and build business models and market strategies that will enable them to grow, innovate and become more competitive.

"Growth remains a condition for businesses' survival and innovation remains necessary for competitiveness. In fact, the European Commission in the wider context of modernisation of the EU industry, develops policies that help speed up the broad commercialisation of innovation."

Surprisingly, the rate of cloud adoption in countries such as France and Germany was considerably below average, 19% and 22% respectively, and a far cry from the host of Scandinavian leaders.

The specific reasons for adopting cloud computing technology among businesses also varied to some extent, with nearly seven out of ten enterprises using the cloud for storing files in electronic form, and for email; 68% and 69% respectively.

Moreover, just 23% of European businesses use cloud computing power for an enterprise's software and just 29% of firms use cloud-based customer relationship management (CRM) tools and apps.

UK-based organisations' cloud usage which also includes office software, and financial or accounting apps, was generally higher than average across the board, with 77% of British organisations using the cloud for storage of files, for example.

Unsurprisingly, the highest proportion of enterprises using cloud computing services were in the information and communication sector, 64%.

This was followed by 'professional, scientific and technical activities' businesses, which stood at 44%, while the rate of adoption for firms in almost all other sectors languishing between 20% to 33%.