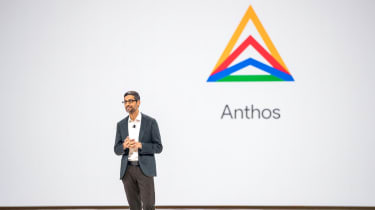 Google has revealed its Cloud Services Platform has been rebranded to Anthos, a vendor-neutral app development platform that will work in tandem with rival cloud services from Microsoft and AWS.

It was developed as a result of customers wanting a single programming model that gave them the choice and flexibility to move workloads to both Google Cloud and other cloud platforms such as Azure and AWS without any change.

The news was announced during Thomas Kurian's first keynote speech at a Google Cloud Next event as the company's new CEO, succeeding Diane Greene's departure in November last year.

The announcement was met with the loudest cheer of the day from the thousands-strong crowd in attendance who seemed to share the same enthusiasm as the industry analysts who have been trying to convince Google that 88% of businesses will undergo a multi-cloud transformation in the coming years.

That could be some way off though, considering global market intelligence firm IDC said last year less than 10% of organisations are ready for multi-cloud, with most sticking to just one vendor. 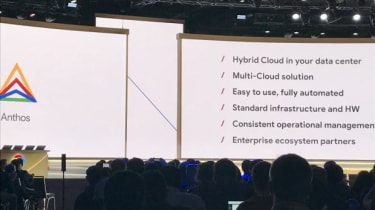 Anthos will allow customers to deploy Google Cloud in their own datacentres for a hybrid cloud setup and also allow them to manage workloads within their datacentre, on Google Cloud or other cloud providers in what's being described as the world's first true cloud-agnostic setup.

"The only way to reduce risk is by going cloud-agnostic", at least that's according to Eyal Manor, VP engineering at Anthos. He said that managing hybrid clouds is too complex and challenging, and the reason why as much as 80% of workloads are still not in the cloud.

As it's entirely software-based and requires no special APIs or time spent learning different environments, Manor said you can install Anthos and start running it in less than 3 hours.

It became generally available Tuesday both on GCP with Google Kubernetes Engine (GKE), and in customers' datacentres with GKE On-Prem.

The announcement marks Google's apparent move to make managing infrastructure much simpler for its customers so they can focus on improving their business.

By using Anthos, enterprises can depend on automation so they can "focus on what's happening further up the stack and take the infrastructure almost for granted", said Manor. "You should be able to deploy new and existing apps running on-premise and in the cloud without constantly having to retrain your developers - you can truly double down on delivering business value".

Some of the world's leading businesses have been given early access to the platform already such as HSBC which needs a managed cloud platform for its hybrid cloud strategy.

"At HSBC, we needed a consistent platform to deploy both on-premises and in the cloud," says Darryl West, group CIO, HSBC. "Google Cloud's software-based approach for managing hybrid environments provided us with an innovative, differentiated solution that was able to be deployed quickly for our customers."

GCP customers have already invested heavily into their infrastructure, forging relationships with their vendors too which is why Google has launched Anthos with an ecosystem of leading vendors so users can start using the new platform from day one.

Cisco, VMware, Dell EMC, HPE, Intel and Atos are just a few that have committed to delivering Anthos on their own hyperconverged infrastructure for their customers.