Is it time to drop Dropbox? 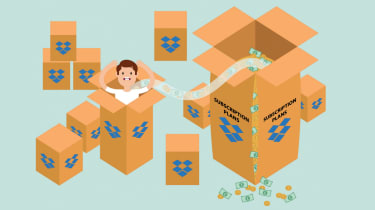 Like the 20-goal-a-season striker who turns up in the manager's office asking for a new contract, Dropbox is good and it knows it. That's why it's turning the screw on free users, enforcing significant price rises on subscribers and doing its level best to turn the red ink on its profit-and-loss sheet to black.

The warning signs literally started appearing in March, when free users suddenly received alerts that they couldn't install Dropbox on new devices because the company had imposed a strict three-device limit. Any devices you had linked to Dropbox prior to March would remain so, but if you subsequently tried to add a new one, you couldn't just swap one of the old devices out you had to reduce the number of devices on your account to two and then add the new one.

Want the freedom to install Dropbox on as many devices as you like again? Well, step right over here and take out one of Dropbox's subscription plans, from the bargain price of 5.99 per month. Except that price didn't last long. Last month, Dropbox imposed 20% price rises across the board, meaning the cheapest subscription plan now costs just shy of 100 a year, or 7.99 per month. If you don't want to pay a year's subscription in advance, that's hiked up to 9.99 per month or 120 a year.

To be fair to Dropbox, it has increased the amount of storage available to paid-for subscribers. Plus users have seen their storage quota double from 1TB to 2TB, and the service has rolled out several new features, including the ability to "rewind" your entire Dropbox should ransomware encrypt all your files and demand you immediately shuttle 500 to Sergei in Moscow to get them back.

That Dropbox is brilliant is not in question. I've used it for personal and business files for years and I can count on the fingers of one hand the number of times it's let me down. And because I've managed to harvest chunks of extra storage by recommending Dropbox to friends and buying certain devices over the years, I've not had to pay for it.

But now I feel like I'm being boxed in by Dropbox. The three-device limit will eventually bite me (I currently have it installed on no fewer than 21 devices, although a good chunk of them are sitting unused in my kit cupboard) and Dropbox is so firmly integrated into my work and personal life that I'd struggle to get by without it. Almost any app or productivity software you can think of integrates with Dropbox no other service offers the same carefree file syncing.

So at some point soon I'm going to be faced with a choice. Do I pay up and tether myself to Dropbox and its price rises for the foreseeable future? Or jump ship before I'm in too deep? You might reasonably argue that I've had a good run on a free service, and I should be prepared to pay for something that's so valuable to my business. But there's something about being strong-armed into subscribing that leaves a bad taste. It's nowhere near as malicious as the ransomware it guards against, but it's not entirely dissimilar, either: it's got my data, now it wants my money.