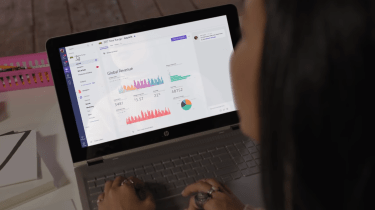 The number of individuals using Microsoft's flagship workplace hub has soared in the last few months to leave its key competitor Slack in the dust, figures released by the firm show.

Two years after Microsoft launched its Teams platform, which is part of the firm's Office 365 suite of apps and services, the company is boasting the digital workspace has more than 13 million active daily users.

This is one-third more than Slack's 10 million daily user count according to the latest figures the company has disclosed. Active weekly users for Microsoft's service, meanwhile, stand at 19 million.

The feat is more staggering considering that Microsoft's platform was lagging behind its rival as soon as April this year, according to a chart the company produced. 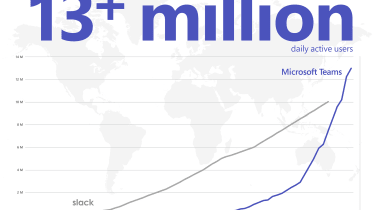 The pace of growth has been sharp but will not come as a surprise considering the number of organisations that are reliant on Microsoft Office 365, of which Teams is an integral component.

Distributing Microsoft Teams to its pre-existing customer base has likely been a huge factor in its growth since it was first launched two years ago.

The company says Teams now boasts a user base of 500,000 organisations. Slack, meanwhile, has more than 85,000 paid-for organisations, according to its latest figures, but the total number of businesses signed up to the workplace hub has not been disclosed.

Microsoft has also used this opportunity to introduce a raft of additional features for the workplace app, including priority notifications and read receipts for private chats.

Announcements can allow team members to flag important news in a channel, while cross-channel posting saves time on copy-and-pasting the same message to different audiences.

IT administrators are also being helped to deploy the Teams client and manage policies for every member within an organisation. Pre-defined policies, in areas like messaging and meetings, can be applied to employees based on the needs of their individual roles.

Slack itself recently announced a number of updates to its functionality and user interface. These span shared channels with customers and vendors, as well as added integration between email and calendars.

Commenting on Slack's IPO a few weeks ago, vice president and principal analyst with Forrester, Michael Facemire, said Slack's success will be determined by how well it can penetrate enterprises.

"Can Slack prove to the enterprise buyer that it is more than a chat app, more than a collaboration tool, but instead an enterprise collaboration platform? If Slack can do this, expanding out of a tech-savvy user base and into all parts of the business become much easier, as it starts to do work for everyone.

"The next challenge is selling its service into the enterprise. Many companies have multiple instances of free Slack in use. But this group of users face their first hurdle when these free accounts need enterprise governance (single sign-on, message retention rules, etc).

"Will Slack be able to prove the value of both paying the fee and doing the work to integrate with existing systems? This question will also signal how quickly it can succeed in an enterprise market."

IT Pro approached Slack for comment and an update on its active daily user count, but hadn't received a response at the time of publication.