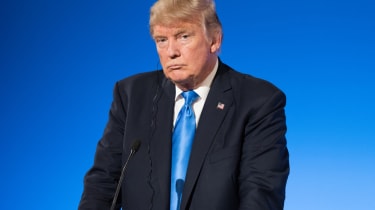 US President Donald Trump has requested more information on how the Pentagon is developing its JEDI cloud computing contract following concerns from Republicans that other providers were unfairly excluded.

Senate Homeland Security Committee Chair Ron Johnson said in an interview that he had discussed the contract with Trump aboard Air Force One adding that the president "wanted to understand what the issues were, what our concerns were," according to a Bloomberg report.

There are also reports of a letter sent from Senator Marco Rubio to national security advisor John Bolton requesting the contract be delayed. A spokesperson for Rubio said he and Trump had discussed the letter.

"I respectfully request that you direct the delay of an award until all efforts are concluded in addition to evaluating all bids in a fair and open process in order to provide the competition necessary to obtain the best cost and best technology for its cloud computing needs," Rubio reportedly wrote.

According to Bloomberg's unnamed source, who allegedly heard the call, Trump sounded as though he was considering cancelling the contract outright.

The highly sought after Joint Enterprise Defense Infrastructure (JEDI) contract is worth $10 billion and is part of a broad modernisation of Pentagon information technology systems that could take up to 10 years. Some have argued that the single nature of the contract favours Amazon Web Services, which, along with Microsoft, are the remaining contenders.

A number of cloud providers and experts would be in agreement with Trump if the reports are true. Both IBM and Oracle have raised concerns over the fact the contract will be awarded to one provider, which both companies have condemned and also taken legal action over.

A decision to review the contract process would also be seen as yet another clash between Trump and Amazon CEO Jeff Bezos, following a string of public snubs.

"So sorry to hear the news about Jeff Bozo being taken down by a competitor whose reporting, I understand, is far more accurate than the reporting in his lobbyist newspaper, the Amazon Washington Post. Hopefully the paper will soon be placed in better & more responsible hands!" he posted in January, in relation to Bezos' divorce from his now ex-wife Mckenzie Bezos.