View from the Airport: Oracle OpenWorld 2019 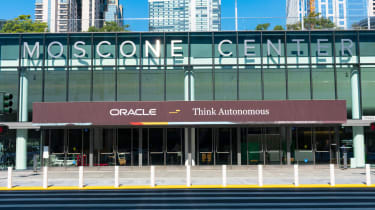 These bold statements were the bread and butter of Oracle OpenWorld in San Francisco last week. The unifying element between them all? Data. Indeed, the tech giant talked up the value of data and excelling not just existing in a data-driven world during most if not all sessions during the conference.

But it's not just about hoarding data for data's sake or trying to make sense out of that data deluge. Far from it. Oracle's key message was all about using machine learning coupled with human ingenuity so that the "possible becomes achievable." Or, taking it one step further, Oracle claims it can help people achieve the extraordinary.

While this year's OpenWorld was filled with more announcements than last year, the common themes of automation, data-focus, integration, and security permeated.

The firm unveiled what it claims is the world's first "autonomous OS" named Oracle Autonomous Linux bigging up its security credentials and ensured the importance of partners was not understated.

Despite all the PR and marketing efforts on ensuring those key themes resonated with attendees, the biggest takeaway for me was that of Ellison's personal nod to Mark Hurd's ill-health.

Maybe I'm reading far too much into a simple statement of genuine love, but in a world where we are focused on autonomy, machine learning and robotics, this pure act of humanity shone through for me.

During his closing keynote, about 10 minutes in, Ellison was clearly struggling to hold it all together. So what he said next was really from the heart.

"I would just like to take a moment and say how much I miss Mark Hurd, personally. We've worked together for a long time, I love him, and I wish him a speedy recovery," he said, to much applause and agreement from the audience.

He then quipped: "I don't have so many friends that I can afford to lose any," before doing his best to continue his presentation about the company's Fusion middleware platform.

I've been called cynical in my time and, now, I'm ready to be called a sucker, but what Ellison said off-script and away from the military operation that is any tech conference, let alone one of Oracle's was, I believe, totally genuine.

In a world where tech is so sophisticated, it promises to outpace what humans can do (if it hasn't already in certain cases) it just goes to show how important humans and human connections still are.

Larry - if you're ready this, you really pulled on my heartstrings. I'll admit I had a lump in my throat during the non-Fusion aspect of this presentation. But I really did see through the Silicon Valley veil and the hurt in your eyes and now I know, at the crux of it all, you're just a guy honestly trying to do good things with technology.